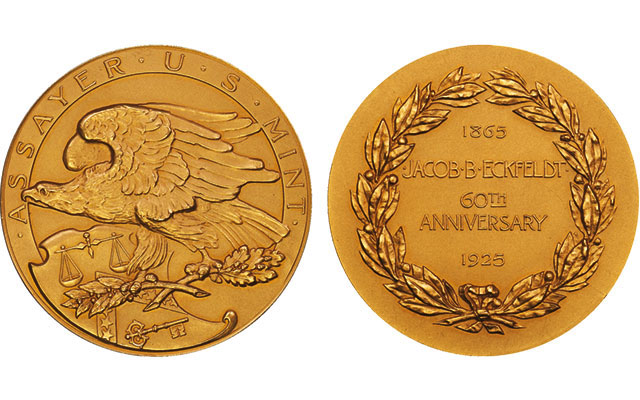 Jacob Bausch Eckfeldt’s 60-year anniversary in the Assay Department at the Philadelphia Mint, 48 of them as assayer, was recognized in 1925 with this 51-millimeter gold medal.

Adam Eckfeldt, honored on this gold 1839 retirement medal, is credited, among many achievements, with striking the first ever U.S. coin — the silver 1792 half disme. 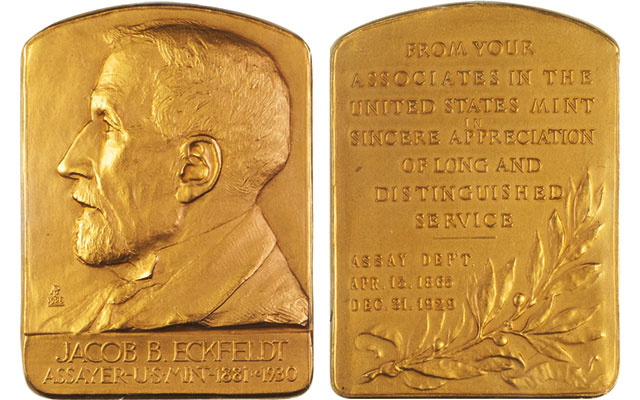 At his 1930 retirement, Jacob Bausch Eckfeldt was presented with this gold medal, bearing his likeness on the obverse. 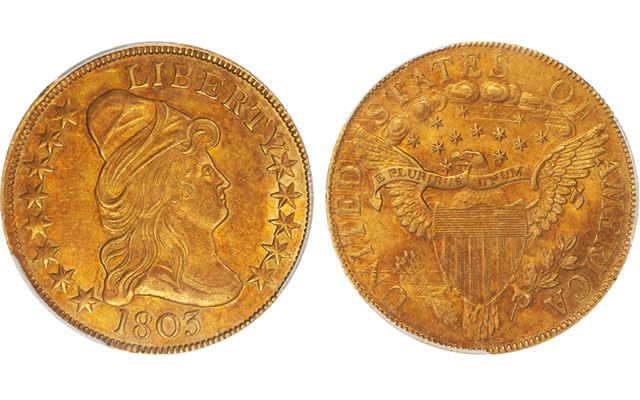 Struck under Adam Eckfeldt’s watch as assistant coiner, this 1803 Capped Bust, Heraldic Eagle $10 gold eagle came into the possession of the Eckfeldt family archives in 1903. It was originally paid to a U.S. Mint employee in 1807. 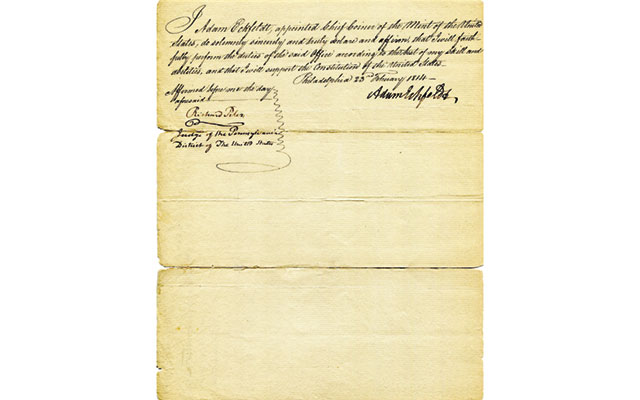 Adam Eckfeldt signed this affirmation as chief coiner of the Mint on Feb. 23, 1814, before a judge of the Pennsylvania District of the United States in Philadelphia.

Descended from the “first family” of the U.S. Mint, Henry Howard Eckfeldt has been custodian since 1967 of the Eckfeldt Family Archives of coins, medals and documents reflecting four generations of service to the production of the nation’s coinage, beginning in the 18th century.

The Eckfeldt family’s legacy with the U.S. Mint began in the 1790s with John Jacob Eckfeldt, a contractor to both the Mint of North America and the first U.S. Mint.

Now, Henry Eckfeldt, a seventh generation descendant from John Jacob Eckfeldt, has consigned the archives for sale Oct. 30 to Nov. 9 as a single lot on eBay, through Tangible Investments.

Before the birth of the United States, the Eckfeldt family was at the center of the effort to create a coinage for the newly independent colonies.

From 1783, when John Jacob Eckfeldt, a leading tool and die manufacturer in Philadelphia, made the dies for coins struck by a contract minter for the government under the Articles of Confederation, the family maintained an archive of coins, medals and documents.

A retired civil engineer, Henry Howard Eckfeldt, now 76, has carried the collection with him each time work and residence took him to countries around the world.

Henry followed the pattern of his mining engineer father, who carried the collection with him on each of his work moves. When Henry’s father passed away in 1967, Henry retrieved the archives from the family home in Peru.

The archives have traveled in numerous countries and been on at least three continents.

Louis Palafoutas of Tangible Investments said the Eckfeldt lot is being offered with an undisclosed reserve. The eBay seller name is tangibleinv.

As part of the sale, Tangible Investments is also offering 25 individual lots of 18th and 19th century United States coins struck at the U.S. Mint in Philadelphia.

Henry Eckfeldt said he remembers seeing the items in the archive while growing up in Peru where his father’s mining responsibilities took the family.

Henry Eckfeldt is the great grandson of Jacob Bausch Eckfeldt, who served more than six decades in the employment of the U.S. Mint at Philadelphia. Nearly five of those decades were in the presidentially appointed position of assayer. Two unique gold medals for his lengthy Mint service are among the offerings:

??A 51-millimeter round gold medal dated 1925 reflects his 60th anniversary of Mint employment. The medal is graded Proof 66 by Numismatic Guaranty Corp.

? A second, rectangular medal was presented to him in 1930 following his retirement from the U.S. Mint. The medal is graded NGC Proof 67.

Jacob Bausch Eckfeldt’s tenure stretched from April 15, 1865, as a second weigher in the Assay Department at the Philadelphia Mint, to assistant assayer in 1872, to assayer in 1881, his post through 1929.

He had followed in the footsteps of his father, Jacob Reese Eckfeldt, who served as assayer in Philadelphia from 1832 to 1872.

Jacob Reese Eckfeldt’s father, John, known to numismatic historians more readily by his middle name, Adam, first served as a contractor to the fledgling Mint from 1792 to 1795, when he joined the Mint’s employ as assistant coiner.

Adam Eckfeldt was elevated to chief coiner in February 1814. Although he officially retired in 1839, he continued to serve as a volunteer at the Mint through 1852.

The Eckfeldt Family Archives include the 1839 gold medal honoring Adam Eckfeldt upon his retirement as chief coiner. The medal is graded NGC Proof 62 Cameo.

The archives also include Adam Eckfeldt’s 1814 presidential appointment as chief coiner, signed by James Madison as president and James Monroe as secretary of state.

Mint Director R.M. Patterson’s signed Feb. 8, 1814, letter recommending Adam Eckfeldt’s elevation to chief coiner, as well as his court-sworn affirmation Feb. 23, 1814, accepting the duties of the office, are also part of the archives.

Adam Eckfeldt is credited with building the fledgling Mint’s first screw press. He executed the dies and struck the first ever U.S. coin — the silver 1792 half disme; redesigned the first cents; and engraved the first half cent.

The Eckfeldt Family Archives include appointment documents signed by Presidents James Madison, James Monroe, Andrew Jackson and Chester A. Arthur, some of which were passed down through seven generations of Eckfeldts.

The coin was originally received in 1807 by Samuel Stearns Jr. as part of his salary as Mint adjuster. Stearns passed the coin along to his daughter, Johannah, upon her marriage in 1828 to Peter R. Latch. The coin entered the Eckfeldt archives when it passed in 1903 into the hands of Jeannette Rose Latch-Eckfeldt, Henry’s great grandmother and wife of Jacob Bausch Eckfeldt, in memory of Samuel Stearns Jr. and of the Eckfeldt era at the Mint.