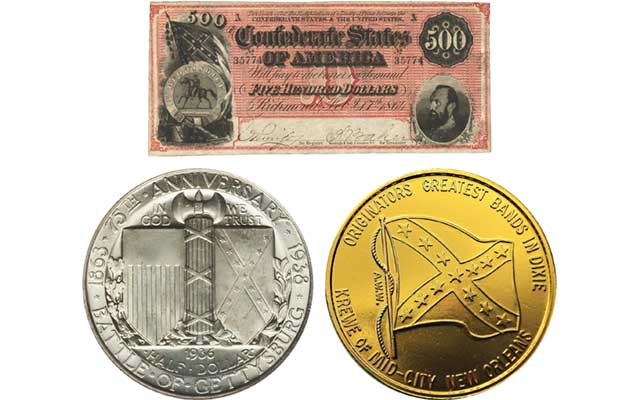 Numismatic collectibles such as the 1864 Confederate $500 note and the 1936 Battle of Gettysburg 75th Anniversary half dollar, whose reverse is shown, are exempt from eBay’s ban on items depicting the Confederate flag. The 1965 Mardi Gras doubloon could fall into a gray area.

The new eBay policy prohibiting the sale of the Confederate battle flag and items depicting it appears to include an exemption for some numismatic items, including classic U.S. commemorative coins and Civil War era notes. However, other numismatic collectibles that bear Confederate flag motifs as part of their design could be banned for sale on eBay.

“Items that are related to the Confederate flag and its image as a symbol of divisiveness in contemporary context will be prohibited on eBay,” eBay’s spokesman, Ryan Moore, said via email June 24. “We recognize the historical significance of this era and will allow some related historical items.”

As of June 24 no written eBay policy on the Confederate flag ban had been released.

Public display of the flag, which has long been divisive in American society, faced new scrutiny in the aftermath of the murders of nine African Americans in Charleston, S.C., with a white man now in custody in connection with those killings. In the aftermath of the killings, the U.S. and state flags were lowered to half-staff on the state capitol grounds in Columbia but the Confederate flag remained at full-staff due to a state law regarding its display, prompting public protests. A broader debate on the flag ensued.

As part of that debate, various commercial outlets have since announced policy changes involving the flag. In addition to eBay,Amazon.com, Target and Walmart have also removed from sale reproductions of the Confederate flag in response to the public outcry.

At eBay, “We have already blocked any new listings for Confederate flags, and we will be removing currently listed items after we notify sellers,” Moore said. “Items affected include the Confederate battle flag, and items that depict the image of the flag as the main theme. Examples include T-shirts and other clothing items, smart phone cases, and bumper stickers.”

Coin World’s initial inquiry to eBay through Moore brought the response that “currency” would be exempt from eBay’s Confederate flag ban.

The exemptions would include such items as Confederate notes that bear flag vignettes and coins like the 1936 Battle of Gettysburg 75th Anniversary half dollar, which depicts a Confederate flag as part of its reverse design (along with the U.S. flag).

“Currency specifically will be exempted from this updated policy,” Moore said via email. “The remaining exemptions are still being reviewed and sellers who will be impacted will be notified.”

While the term "currency" is sometimes applied soley to paper money, coins are alsi considered currency.

As of June 24, eBay still had auction listings for Confederate flags, and numismatic items including tokens and medals, silver rounds and bars, and fantasy notes bearing Confederate flag motifs, in addition to coins and notes.

Coin World contacted Amazon.com on its ban policy but as of June 25 had not received a response.