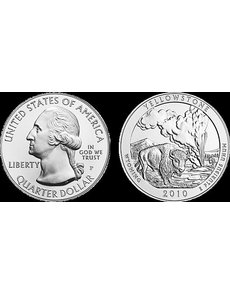 Collectors who placed orders May 17 during the opening day of sales for the Uncirculated 2010-P Yellowstone National Park 5-ounce silver coins had no problems with the U.S. Mint’s website or telephone ordering venue.

Mint spokesman Michael White said May 18 that through the first day of sales, 18,143 coins out of the maximum mintage of 27,000 were sold. The coins were offered at $279.95 each, limited to one coin per household during the first week of sales. Mint officials indicated that if coins were still available at the end of the first week, the Mint would re-evaluate the household ordering limit.

The Mint anticipates accepting orders beyond the 27,000 coins available. A waiting list will be created and orders filled in the order in which they were placed, should coins become available because of returns or cancellation due to such instances as expired credit cards.

Mint officials announced May 18 that customers purchasing the Yellowstone coin both over the Mint’s website at www.usmint.gov and through the contracted order fulfillment center in Indiana by telephone at (800) 872-6467 experienced no obstacles when sales began at noon Eastern Time May 17.

For the Hot Springs coins, customers experienced a sluggish Mint website when sales opened at noon Eastern Time April 28, and the website was shut down for about an hour while Mint technicians worked on the site.

Sales continued for a week before Mint officials announced sufficient orders had been received to exhaust the 27,000 Hot Springs 5-ounce coins. However, as of May 19, the Mint was still accepting orders to be placed on a waiting list.

Mint officials had not disclosed when the Uncirculated 2010-P Yosemite National Park 5-ounce silver coins would go on sale. ¦