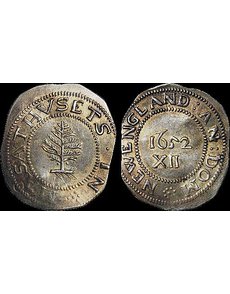 Though not the most expensive piece in David Sundman’s 18-coin collection of early Massachusetts silver coins, this 1652 Massachusetts Bay Colony Pine Tree shilling graded MS-62 was among the most attractive. It brought $49,938.

The collection spans the Massachusetts silver series from the undated NE (New England) coinage of 1652, continuing through the Willow Tree coins, followed by the Oak Tree coins and then the Pine Tree issues.

In a post-sale press release, Sundman stated, “Prior to the sale, I was a bit nervous — would other collectors like these historical pieces as much as I did?” His concerns are certainly understandable given the highly specialized nature of the collection.

Leading the group was a Professional Coin Grading Service About Uncirculated 55 example of the classic undated NE silver shilling. It’s cataloged as Noe-1-A in The New England and Oak Tree Coinage of Massachusetts by Sydney P. Noe, the standard reference to the series, and serves as the plate coin. It realized $440,625, establishing a record price for the issue.

The piece was last offered at auction in Stack’s Oct. 18, 2005, sale of the John J. Ford Jr. Collection of Massachusetts silver coins, where it was graded choice Very Fine by Stack’s and brought $253,000. Like many coins in Sundman’s collection, it has a long ownership history that can be traced back more than a century and includes many well-known names.

Those looking for a great coin to represent the type could find a classic 1652 Pine Tree shilling graded PCGS Mint State 62, Noe-1, with a large, broad and complete planchet. The lot description stated, “Pieces like this are a classic inclusion in any collection, and if you were to own just one colonial coin, this would be a nice choice.” It brought $49,938.