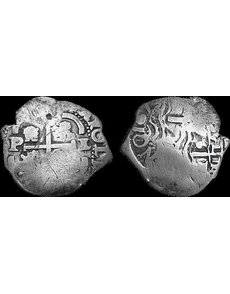 This piece, possibly a silver Spanish cob coin, was discovered at a South Carolina plantation along with many other early coins from different nations. The exact identification of this worn coin is sought.

I would appreciate your help in identifying the Spanish silver cob coin, likely a 2-real piece, I recently found at a former South Carolina plantation.

Based on other finds from the area, the area was also used as a camp by the British Army about 1780.

I am able to determine the following details about the coin:

1. It weighs 5.3 grams. Is the short weight possibly caused by a part of the coin breaking away?

2. It was minted in Potosi.

5. The obverse of the coin has a few details, such as waves, and the possible number, “76.” Is the piece double-struck?

The coin, as with all my finds, goes to the plantation owner. If you can provide an approximate date, I would appreciate it.

To date, the site has also given up nine Roman coins, including an antoninianus of Gallas and a very nice siliqua of Julian II. I am not claiming any previous Roman occupation of the site. However, it is good evidence, I think, of an owner’s coin collection having been looted by a British soldier and then lost.

The weight of the coin is one of the more difficult items to use in attempts to identify this coin, because portions of the coin design are definitely worn away.

Your guess of a Potosi Mint appears to be a good guess, and if so, that Mint’s location was in Peru.

For background, according to Freeman Craig Jr. in The Coinage of El Peru, pubished by the American Numismatic Society, “Assayers were required to display their initial(s) on each coin in order that the authorities could determine who was responsible if debased or underweight pieces came to light.”

The relationship of the assayer to the time period can be used as an identification tool, although Craig notes that it will work “as long as official mint records are available and the assayer’s initial(s) are clear on each coin.”

On the image at left above, it appears that the assayer’s initials are A at right and possibly L at left.

The guesses you provide for the letters on the reverse and the possible double-struck suggestion are difficult to determine.

Exact identification of this coin was not possible by Coin World.

The find of other coins at the plantation would seem to lend credibility to the possibility of the owner being a coin collector.