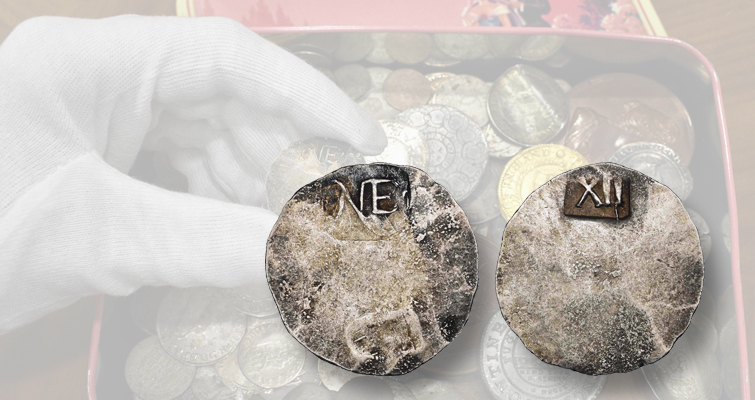 A recently discovered 1652 New England shilling found in a tin and possibly collected at the time of issue has a top estimate of $300,000 at Morton & Eden’s Nov. 26 auction in London.

All images courtesy of Morton & Eden. 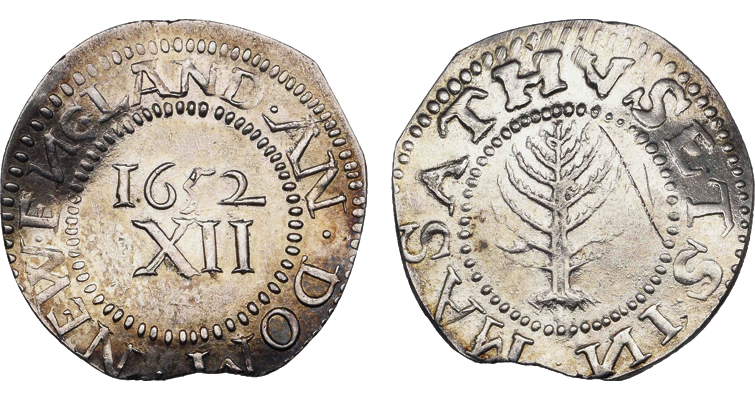 All images courtesy of Morton & Eden.

An undated New England shilling that was authorized by the Massachusetts General Court in 1652, found in an old tin alongside some other early American issues, is expected to bring as much as $300,000 at Morton & Eden’s Nov. 26 auction in London.

The auction house believes it was likely acquired near the time of issue by William Wentworth (1616 to 1697), an early Colonial settler who may have landed in New England in 1636 with John Wheelwright. The cataloger added, “Although the possibility exists that the shilling was collected at a later date by one of William Wentworth’s numerous descendants (including one Lieutenant Governor and two Colonial Governors of New Hampshire), the presence in the family collection of certain other pieces ... supports the hypothesis that William Wentworth probably obtained it when it was new.”

The box descended through the family to John Wentworth Jr. (1745 to 1787), who served as a delegate for New Hampshire to the Continental Congress and who was a signatory to the Articles of Confederation.

James Morton said on the discovery, “There were several hundred coins in the old Barker & Dobson sweet tin. The coins were completely varied, from all over the world and in all metals, ranging in date from medieval times right up to the 1970s. I could see straight away that there were plenty of interesting pieces alongside some ordinary modern coins, but there was one simple silver disc, which immediately jumped out at me. I could hardly believe my eyes when I realized that it was an excellent example of a New England shilling, struck by John Hull in 1652 for use as currency by early settlers in the Massachusetts Bay Colony.”

Writing in his book The Silver Coins of Massachusetts, Christopher J. Salmon describes the charms of these early silver coins of Massachusetts. “Nothing less than the first coins struck in British North America, they were produced early in the second generation after the establishment of the Massachusetts Bay Colony. They are remarkable for their naïve charm and austere puritan style, reflecting the prevailing aesthetic of seventeenth century New England, as ultimately derived from artistic modes established in contemporary England.”

The coin offered in the auction is listed as the Noe 3-B and Salmon 3-C variety, as separately listed in two references for the series.

The lot description states that it is “the finest known example of the first coin struck in what is now the U.S.A., recently discovered in the United Kingdom and now in a Numismatic Guaranty Co. holder graded Mint State 61, the only New England shilling to have been classed as ‘Mint State’ by either grading service.”

The cataloger concludes, “It is believed that this example is the tenth-known coin struck from this combination of punches, and its Mint State status is superior to that of all known specimens of the type.”

Also found in the tin was a 1652 New England Pine Tree large planchet shilling graded by Numismatic Guaranty Co. as Uncirculated Details, Obverse Scratched, with the damage modifier referring to scratches in the field near the tree. It is listed as Noe 9 and Salmon 7a-Diii.

Salmon said of this variety that, due to die deterioration and subsequent re-engraving, “The tree has deteriorated greatly with broadening and simplification of details of the upper four branches and only faint depiction of the lower branches, reflecting a very late die state.”

More surprises in the tin

Two 1776 Continental Currency pewter dollars were also in the box, with one recently graded MS-63 by NGC and the other grading MS-62, both struck from the same pair of dies and with similar die flaws. The auctioneer suggests that these may have been acquired by John Wentworth Jr. or another family member when they were new. Both have high estimates exceeding $50,000 each.

Another iconic early American issue is a 1781 Libertas Americana medal by engraver Augustin Dupré, with a portrait of Liberty that would be used as a model on early American coins. Graded NGC MS-62 brown, the cataloger adds, “the surface displaying light surface marks overall and with an old verdigris spot on reverse rim, generally extremely fine,” and it has a top estimate exceeding $10,000. 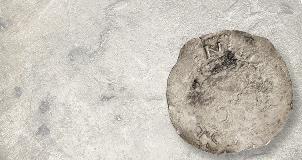 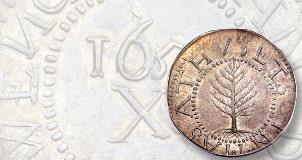 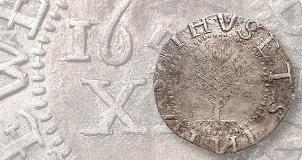