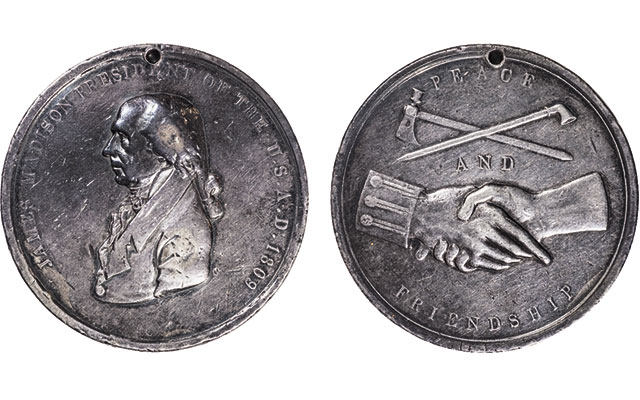 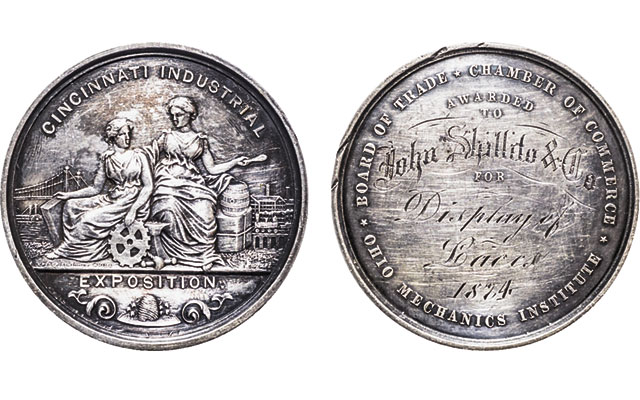 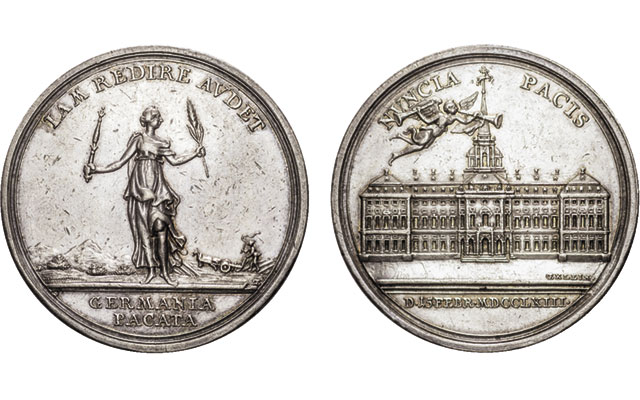 A silver medal dated Feb. 15, 1763, marks the Treaty of Hubertusburg (involving Prussia, Austria and Saxony), which, along with the Treaty of Paris, marked the end of the Seven Years' War (called the French and Indian War in America). Early American History Auctions grades the piece as choice Extremely Fine to About Uncirculated and offers it at auction online Feb. 13, 2015.

The 62-millimeter medal, offered in choice Very Fine condition, according to the auction firm, is accompanied by a photographic certificate of authenticity from the American Numismatic Association Authentication Bureau.

The 62-millimeter medal “was the size usually sold to collectors after the mint began selling medals to the public in 1861,” according to Julian.

Other medallic issues offered in the sale are a unique pair of award medals, one in silver and the other in copper, presented in 1874 at the Cincinnati Industrial Exposition to John Shillito & Co., a department store business with a corporate history dating from 1830 to the late 20th century. The firm is probably best known numismatically as an issuer of encased postage stamps early in the Civil War.

The silver medal was presented for the “Display of Laces,” and the copper version, for “Rugs and Ottomans.”

The special medals, in choice Extremely Fine grade according to the auction firm, were presented by the Ohio Mechanics Institute, Chamber of Commerce, Board of Trade.

A silver 1763-dated medal from the Seven Years' War period (called the French and Indian War in America) is offered in choice EF to About Uncirculated condition, according to EAHA. It is attributed as Betts 446 by C. Wyllys Betts in American Colonial History Illustrated by Contemporary Medals.

The medal bears the date of Feb. 15, 1763, marking the Treaty of Hubertusburg (involving Prussia, Austria and Saxony), which, with the Treaty of Paris, marked the end of the long war.

The medal’s obverse is dominated by the Messenger of Peace vignette, along with inscriptions related to the Feb. 15, 1763, treaty.

For more information on the sale and other lots offered, visit the Early American website.