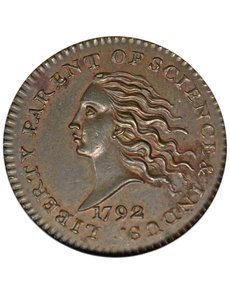 Several outstanding examples of early United States coinage will be featured as Heritage presents the Official Auction of the October 2012 National Money ShowSM in Dallas. Floor auction sessions are scheduled for October 18 and 19 at the show, with non-floor sessions scheduled through Heritage LiveTM on October 20 and 21. All winning bids in this Signature Auction are subject to a 17.5% Buyer's Premium.

Part 1 of The Greensboro Collection is the source for several of these outstanding rarities from the earliest days of our nation's history. The 1792 dime struck in copper is a landmark in U.S. coinage history, and unlike the more famous 1792 half dismes in silver, the disme patterns in copper are very rare. This experimental Judd-10 variety, struck with a reeded edge, is graded Proof 62 Brown by NGC.

Also from The Greensboro Collection are specimen strikings of two of the earliest US Mint issues. A 1793 Wreath cent with Vine and Bars edge, Sheldon-6 variety, was used to depict its variety in important 19th century photo plates by Levick and Crosby. Many collecting experts believe it must have been struck for presentation purposes, and the Specimen 66 Brown grade assigned by NGC, reflects that. This is a truly special coin among early large cents with vibrant and bright surfaces unlike any other Wreath cent.

The other Specimen is a 1794 half dime, V-3, LM-3 variety, graded Specimen 67 by PCGS. This coin's reflective surface quality sets it apart from most of its peers, which have frosty luster. It is also the single finest Specimen half dime out of only a few for the year.

For the second time this year, Heritage is offering one of the four known examples of the 1802 novodel proof dollar. This one, graded Proof 64 by PCGS, comes just two months after Heritage’s landmark offering of another example in August. This near-Gem specimen previously was in the collections of Virgil Brand and the Norweb family, and also comes from Part 1 of the Greensboro Collection.

Not an example of the earliest US coinage, but a rarity from the very first year of the fabled Carson City Mint, is an 1870-CC double eagle from The Gnome at the Shore Collection. There were fewer than four thousand 1870-CC double eagles struck and only a small fraction survive, making this XF40 example a highly desirable coin. The Carson City Mint, established in Nevada six years after statehood, is synonymous with the Old West in money lore. Bigger coins, such as silver dollars and gold double eagles, are the most famous.

Bidding is now open on these and the thousands of other rarities in the Official Auction of the October 2012 National Money ShowSM, at HA.com/Coins.