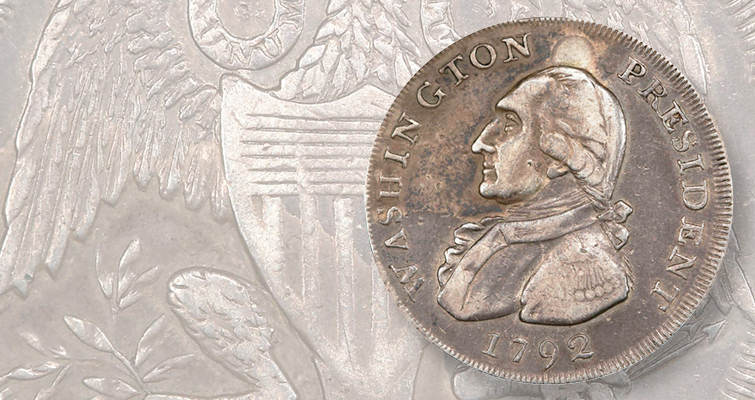 The Baker Collection includes two half dollar patterns in silver stolen in the 1970s and recovered a decade later. 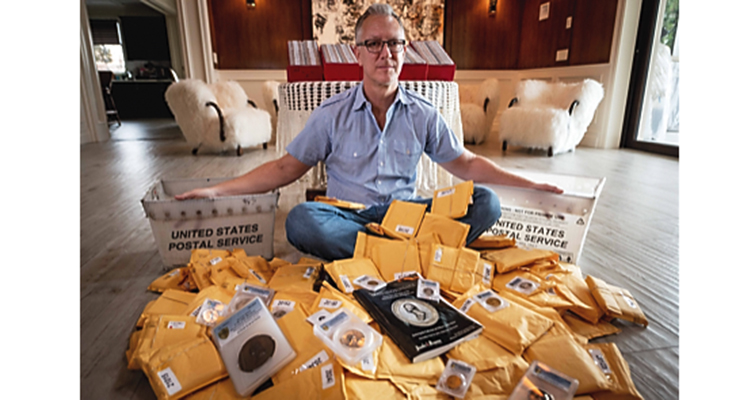 Collector and dealer Dwight Manley displays the more than 850 lots of Washingtoniana that he acquired from the William Spohn Baker Collection. 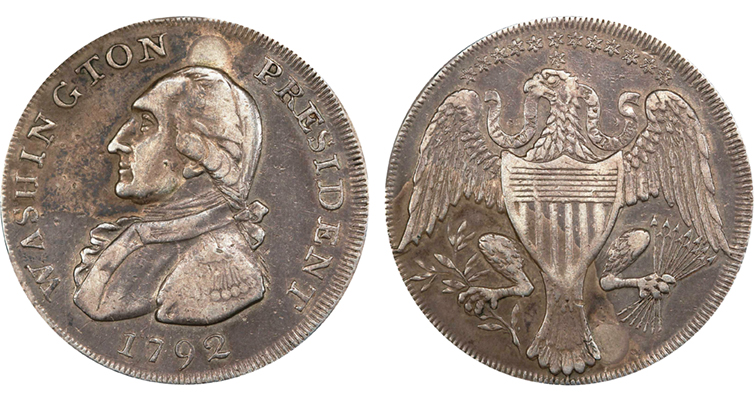 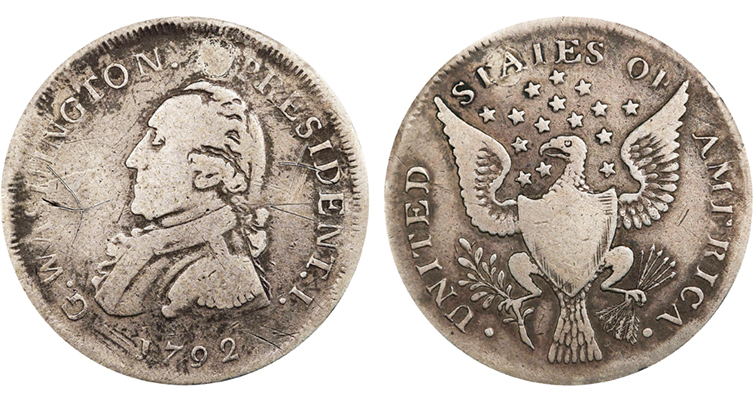 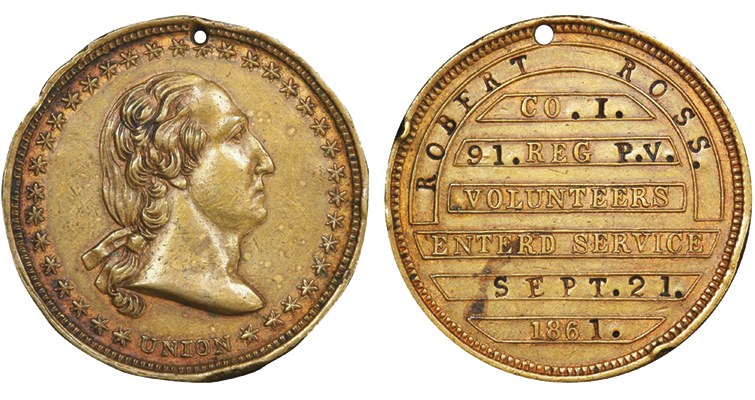 1861-dated brass Civil War dog tag was created for soldier Robert Ross, a member of Company I, 91st Regiment of the Pennsylvania Volunteers, who joined the Union Army on Sept. 21, 1861. 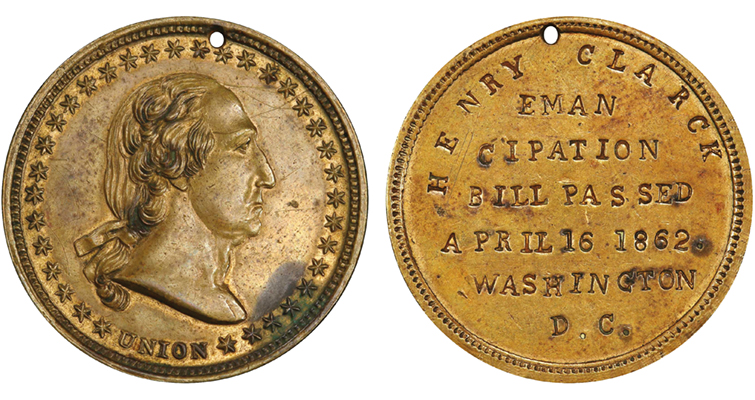 Dwight Manley heeded the advice of his longtime numismatic mentor — prolific researcher and author Q. David Bowers — in buying as many as possible of the Washington tokens and medals from the William Spohn Baker Collection offered Nov. 16 and 18 by Stack’s Bowers Galleries, to keep the assemblage intact.

Baker authored the 1885 reference Medallic Portraits of Washington, which is still considered the seminal work on exonumia featuring visages of the nation’s first president, George Washington.

Baker bequeathed his collection to the Historical Society of Pennsylvania on Nov. 15, 1897, with the provision that the society maintain the collection in perpetuity. Deaccession of the collection to allow its public sale required court approval in Philadelphia as well as clearance from the state attorney general.

By the time the auction ended, Manley had acquired more than 850 of the 1,102 lots offered, either as the top bidder or by purchasing the pieces after the sale from other top bidders.

Manley’s capital outlay of more than $1.4 million represents more than 70 percent of the sale’s proceeds.

Manley is used to big deals. He engineered the acquisition and marketing of treasure salvaged in the late 1980s from the 1857 shipwreck SS Central America and the recovery of additional treasure in 2014.

Manley told Coin World March 2 that he didn’t intend to disclose his purchases, until he learned of news reports about the collection being sold that were stating that its contents had been scattered to a multitude of collectors in the hobby. Manley wanted to set the record straight.

Manley wants to keep the collection as complete and intact as possible. Manley plans to add his Baker Collection acquisitions to Washington material he has had for years and loan it to the American Numismatic Association’s Edward C. Rochette Money Museum for an exhibit he will underwrite.

Manley says the collection, whose components he considers to be “the Mount Rushmore of medals,” deserves to be placed on public exhibit and made available for numismatic research. It had languished for more than a century in storage at the Historical Society of Pennsylvania.

“The history of great collections in private hands is that nearly all are dispersed to new owners,” Bowers told Coin World. “Coins with such pedigrees as Louis E. Eliasberg, Harry W. Bass, Emery May Holden Norweb, and others — to mention some collections I have handled — are now a part of other cabinets.

“The Baker Collection, a notable exception, is different in two major ways: Dwight is making it available for all to see, study, and enjoy, and, also, as it is the collection of the author of the standard book on the subject, it preserves a special element of history.

“Of all portrait coins, tokens, and medals, those with the image of George Washington are the most famous and most popular. Likely, no amount of money could today form an equal collection.

“Accordingly, numismatists will benefit immensely — having the chance to study items that have been hidden away for well over a century.”

Manley said that approximately 40 pieces from the collection were stolen sometime in the 1970s and recovered a decade later.

Among the recovered pieces are two that Manley purchased from the Nov. 16 auction sessions: a pair of 1792 silver half dollar patterns, one engraved by Jacob Perkins and the other engraved by Peter Getz.

Manley also picked up among his purchases two Washington and Union pieces, one dated 1861 and used as a Civil War dog tag, and the other dated 1862 celebrating the Emancipation Proclamation.

Graded Very Fine Details, Plugged, by Professional Coin Grading Service, the Perkins pattern half dollar, Baker 20, cross-referenced Musante GW-31 (Medallic Washington by Neil Musante), sold for $78,000 in the Stack’s Bowers Galleries sale. The piece, bearing the Washington, President, Eagle and Stars design, had been holed for suspension. The hole, above Washington’s head, was expertly plugged sometime prior to 1877, according to the auction lot description.

The pattern is one of fewer than a half dozen examples known in silver.

The Baker example came into his possession for $101 in April 1877 from a public auction by Edward Cogan.

Perkins, a noted inventor and printer of early American paper currency, is also credited with the execution of the coinage pattern.

Getz, under commission from Robert Morris, executed the silver pattern half dollar pattern attributed as Baker 24B, Musante GW-22.

One of three known examples in silver with a Twinned Leaf edge, the Baker/Manley example is certified by PCGS as Fine 15 Details. Plugged.

Like the Perkins pattern, the Getz piece was pierced at the top for suspension, but plugged sometime before 1884, possibly in the 1850s or 1860s, according to the auction lot description.

The Getz half dollar and cent patterns were struck on a press made by Adam Eckfeldt, for many years the chief coiner of the United States Mint in Philadelphia.

The Getz patterns are considered by numismatic researchers to be the only Washington pieces of the period produced in the United States. The devices and legends match those outlined in the legislation introduced in December 1791 by Sen. Morris that would become the Mint Act of April 2, 1792.

Morris was chairman of the Senate committee tasked with drafting legislation seeking the establishment the U.S. Mint.

Getz is believed to have engraved the pattern half dollar dies under the tutelage of engraver Robert Birch.

The obverse iconography of Washington is based on a portrait by artist Pierre E. du Simitiere.

The 31.3-millimeter brass Civil War identification tag, Baker 620, Musante GW-565, features on the obverse a Washington and Union portrait, with the reverse offering engraved information about the Union soldier for whom this dog tag was created.

Graded PCGS About Uncirculated 50, the identification tag realized $3,120 at auction.

The tag is engraved on the reverse to identify Robert Ross, a soldier in Company I, 91st Regiment of the Pennsylvania Volunteers, who joined the Union Army on Sept. 21, 1861.

Although researchers indicate that evidence is not conclusive, it is believed the names that appear on the 12 known examples are those of former slaves freed by the April 16, 1862, legislation. The Baker-Manley piece bears the name Henry Clarck. 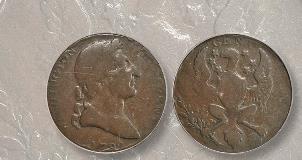 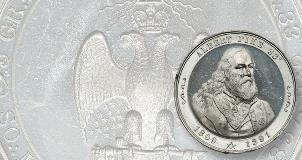 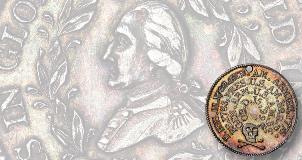