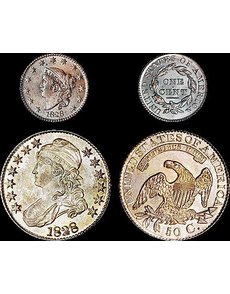 An account written in 1828 by Frederick G. Stark tells of his visit to the Mint — the hard way, as compared to today, as you will see. Stark kept a country store in Manchester, N.H. His account was published by a descendant in the Granite Monthly, November 1881.

Stark left home at 9 a.m., Saturday, Oct. 4, 1828, and went to a hotel to board a horse-drawn stage, this being before the railroad era. About 8 p.m., he arrived in Boston and checked into a hotel. On Sunday, he walked around town, including to a wharf where he conversed with Rand, a portrait painter. On Monday, he made some purchases in Boston. At 5 a.m. on Tuesday, he climbed aboard the stage for Providence, R.I. Arriving there about six hours later, he went directly to the wharf, where he took passage on the finely-appointed steamer Chancellor Livingston. Shortly after noon, the ship left the wharf, headed for Newport to take on passengers.

The boat left Newport at 4 p.m., headed for New York. The sea was very rough that night and most passengers became sick. Somehow, Stark managed to sleep. He awoke at 7 a.m. Wednesday to find that the ship was in the quieter water of Long Island Sound. An hour later, the Chancellor Livingston stopped, dead in the water. The captain said that the center drive shaft to the paddle wheels was broken. Around noon, help arrived from the John Marshall, a steamer from the opposite Connecticut shore. About 200 passengers had lunch aboard the stricken Livingston, then boarded the Marshall and arrived in New York about 9 p.m. The next morning, Stark boarded the steamer for New Brunswick, N.J., where he took stages for Princeton and Trenton. At 9 p.m., in Trenton, he secured supper and lodging for a cost of 75 cents. On Friday, he boarded a steamboat for Philadelphia. The next several days were spent enjoying the sights.

“I went to see the United States Mint. There they were, striking off half dollars in one room, and cents in another. The other part of the works were not in operation. I enquired how many half dollars they struck off in a minute, and they said 43. The pieces of silver were plated out and cut to the right size previously, so that they were only given the impression. It took three men to do this; all of them had hold of the machine at a time, and it appeared to be pretty hard labor.”

Whew! What a trip! Today, in 2014, it takes about an hour to fly from Manchester to Philadelphia. Visitors to the Mint will find a great reception center and a fine tour.