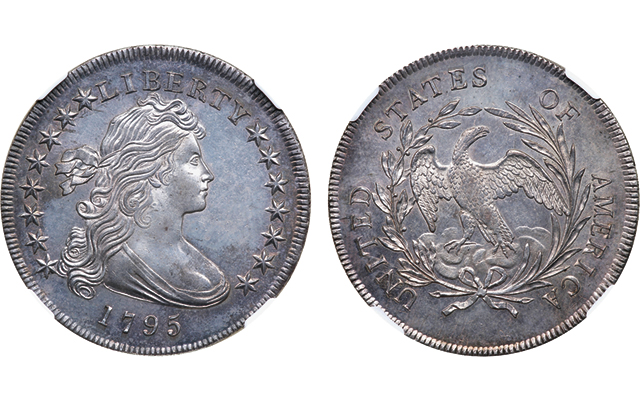 The cataloger of this MS-64 1795 Draped Bust dollar noted that it had the appearance of a Specimen striking. It sold for $223,250.

Early silver dollars can be intimidating for a new collector for a variety of reasons. First, they’re generally expensive. An entry level Draped Bust dollar with a severe impairment, such as a hole, sets a baseline at around $500. Second, they often have problems like cleaning or tooling, and these are often deceptive.

But for the patient, Flowing Hair and Draped Bust silver dollars represent an impressive challenge with a limited range of years, an impressive number of varieties, and solid reference books to help guide collectors.

Here is one of three early dollars that sold at the recent Ira & Larry Goldberg pre-Long Beach Auction, Aug. 31 to Sept. 1:

The story: 1795 saw two obverse types of silver dollar: the Flowing Hair and the Draped Bust. These were each paired with a Small Eagle reverse.

This example graded Numismatic Guaranty Corp. MS-64 Prooflike with an NGC ? brought $223,250. It is the variety Bowers-Borckardt 51, as recorded in Q. David Bowers and Mark Borckardt’s book Silver Dollars & Trade Dollars of the United States, A Complete Encyclopedia, the well-respected reference book in the field.

This variety represents the first appearance of the new Draped Bust obverse design and the book notes that the obverse and reverse punches for the 1795 Draped Bust dollar “far exceeded in quality anything created earlier,” calling it a “masterpiece of intricate engraving.”

The present example was described in the catalog as having “marvelous light golden iridescence” on both sides with “phenomenal Prooflike surfaces.” The firm added that it had the appearance of a Specimen striking and that the visual appeal was superb.

The lot description concluded, “Certainly among the handpicked ambassadors of its Bust Dollar design, this example earns its place in the collection of a numismatist who recognizes the value of aesthetic beauty as well as rarity.”