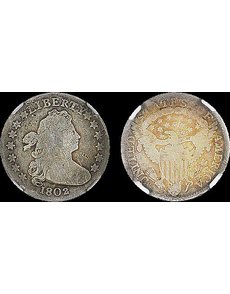 Numismatic Guaranty Corp. has authenticated only the second known example of the JR-1 variety of the 1802 Draped Bust dime.

Numismatic Guaranty Corp. has authenticated the second known example of a die variety for the 1802 Draped Bust dime, the firm revealed June 4.

The coin is the John Reich 1 variety of the 1802 Draped Bust dime, which until the new discovery had been thought to be unique. The coin is cataloged in Early United States Dimes 1796 ­– 1837, a book describing die marriages for dimes of several design types compiled by David J. Davis, Russell J. Logan, Allen F. Lovejoy, John W. McCloskey, and William L. Subjack. The John Reich reference is to the coin’s designer, an early assistant engraver at the Philadelphia Mint.

The JR-1 dime was unattributed when it arrived at NGC’s offices in Sarasota, Fla., in a 15-piece submission, according to NGC.

According to a June 4 press release from the grading service, NGC research director David W. Lange “was stunned when the final coin in a 15-piece submission matched the diagnostics for the JR-1 variety, a die marriage previously believed to be unique. The coin was quickly identified by Lange as having Obverse 1 for 1802, and it seemed that the only work left was to determine whether it was mated to Reverse B or C. When a cursory examination proved that the dime did not display either of the two anticipated reverses, Lange checked each reverse photograph again before comparing the coin against the photo plate and written description of Reverse A — the reverse used to strike JR-1. There was immediately no doubt in his mind that this was indeed variety JR-1, but Lange sought further confirmation from two leading figures in the hobby.”

Lange contacted Brad Karoleff, president of the John Reich Collectors Society, who then shared NGC’s high-resolution photographs with dime and half dime collector Ed Price, “and both concurred that this was indeed only the second known example of JR-1,” according to NGC.

Variety JR-1 combines an obverse die used for three different die marriages of 1802 dimes with a reverse that is unique to the JR-1 marriage. Notes NGC, “The only example known until now had been the plate coin in the JRCS book Early United States Dimes 1796 ­– 1837,” published in 1984, “Despite an excellent photo plate of that lightly worn coin, numismatists had been unsuccessful in locating a second specimen” until now, NGC noted in the release.

The coin was certified by NGC as having Good Details with surfaces that are repaired and whizzed. “Nonetheless, the coin is still a rather attractive example of an early dime,” according to NGC. “It has even wear and a pleasing overall look though with the numerous tiny marks one would expect from many years of circulation.”

The heretofore sole JR-1 coin’s first known auction appearance was in Stack’s April 27 to 29, 1967, Bernard L. Copeland auction as lot 469. The coin brought $475, the second highest price among the auction’s offerings of Draped Bust dimes, topped only by the $1,100 realized by a 1796 example in the sale.

The 1802 coin was one of just three pieces depicted in the catalog’s 39-lot offering of Draped Bust dimes in the auction.

The catalog description for that lot lists no variety attribution for the coin; the cataloging of early dimes was in its infancy in 1967 when compared to the cataloging of half dimes, quarter dollars and half dollars of the late 18th and early 19th centuries.

The major reference to Draped Bust dime varieties available to collectors and researchers in 1967 was a brief 1945 catalog produced by dealer Abe Kosoff, plus several other minor works of research published on the series.

The 1967 catalog description states: “Extremely Fine. Superb golden toning. The entire coin is proof-like. There are, unfortunately, some light pin scratches around the stars and Liberty. For the most part these can only be seen using a magnifying glass. Really a very nice specimen.”

The coin next appeared as lot 58 in Superior’s Miguel Muñoz IV auction on June 7, 1982, where the coin was described as grading Extremely Fine 45.

There, the dime was again unattributed by die marriage, with the catalog description noting the “light pin scratches on the obverse near the legend and stars” that had been described in the Stack’s catalog. The Superior catalog further noted: “Lightly toned with some mint lustre still evident.” The coin realized $7,750 in the Superior auction, the price being the highest for any Draped Bust dime offered in the auction.

The coin was also offered in Stack’s Allen F. Lovejoy September 1990 auction as lot 18. The catalog description for the coin noted the JR-1 designation. The catalog added that it is “Excessively Rare” and, “To date, this is the only known specimen of this variety.” The grade was noted as About Uncirculated in this auction. The coin realized $27,000.

Most recently, the previously unique example sold in Heritage Auctions’ July 31, 2008, sale of the Ed Price Collection for $63,250. By that time, the coin had been encapsulated by Numismatic Conservation Services as About Uncirculated Details, Scratched.

The Heritage auction also identified the piece as the unique JR-1 coin.

Regarding the second identified example, according to NGC, “The submitter has not announced any plans for the rare piece.”¦