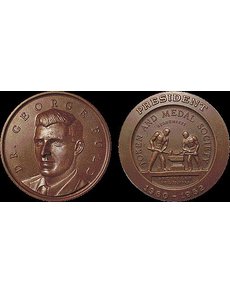 Numismatist Dr. George J. Fuld is recognized on a past presidents medal from the Token and Medal Society. The piece shown was struck in bronze in 1962. 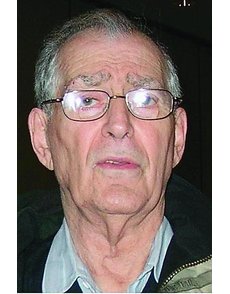 Although he had wide-ranging knowledge in a number of numismatic fields — including Indian Peace medals, and pioneer and territorial numismatics — Dr. Fuld is best known for his contributions with his father, Melvin, to the field of Civil War tokens.

As an 11-year-old growing up in Baltimore, Dr. Fuld became enamored with numismatics, first with Lincoln cents, and then Indian Head cents, transitioning into Civil War tokens.

He introduced his father to the token field, and between the two of them, they acquired thousands of Civil War tokens for their collection and eventual research.

The Fulds were instrumental with a handful of others in the formation in 1960 of the Society of Tokens, Medals and Obsolete Paper Money, with the younger Fuld serving as its first president, from 1960 to 1962. The organization was later renamed Token and Medal Society.

Dr. Fuld served as editor of the club’s publication, now called the TAMS Journal, from 1960 to 1962.

Dr. Fuld is recognized numismatically on past president TAMS medals, struck in different metals. An example of the bronze medal is illustrated here.

In 1967, collector interest had grown sufficiently to support the formation of the Civil War Token Society, with Melvin Fuld serving as its first president.

George Fuld was named to the CWTS Hall of Fame in 2002, the inaugural year for the award.

Also in 2002, Dr. Fuld was recognized by the ANA with its Lifetime Achievement Award.

Dr. Fuld received the ANA Medal of Merit in 1961 and was inducted into the ANA Numismatic Hall of Fame in 2008. Dr. Fuld was recognized by the Numismatic Bibliomania Society in 1993 with its Armand Champa Award, and in 2004 he received the Carl Carlson Award from the Medal Collectors of America.

According to biographical notes accompanying Dr. Fuld’s papers donated to the American Numismatic Society, he earned a doctoral degree from Massachusetts Institute of Technology and was a consultant and vice president of Fuld Brothers (1954 to 1960) before working as a radiation researcher with Goodyear Tire (1963 to 1967).

After marrying his wife, Doris, in 1955, the family established Dorge Approvals, a philatelic and token and medal auction business that conducted sales during the 1970s.

The contents of Dr. Fuld’s research papers donation to the ANS can be found online at http://numismatics.org/Archives/Gjfuldbio.

“The passing of George Fuld is an irreparable loss to the world of numismatics. He was a true pioneer who, with his father, Melvin, opened up the then-bewildering field of Civil War Tokens to a modern audience,” Alexander said. “By the 1990’s, George had covered so many areas (Civil War and Hard Times Tokens, Washington), that he made fewer new discoveries and his output of articles slowed. He continued a lively correspondence and was always helpful to inquiring collectors and researchers.”

Via email from numismatist Alan V. Weinberg: “George collected and lived at a time [in the late 1940s to the mid-1960s] when many colonial coins and Washingtonia, early American medals, Civil War tokens and Hard Times tokens, Western trade tokens and other esoterica were thinly collected and not in demand.

“So, George had frequent access to the choicest material that today is quite popular — somewhat attributable to the start of the 2003 Ford collection auctions cataloguing by Stack’s,” Weinberg said. “Unfortunately, George was not a wealthy man and had to sell or trade off many of the rarest pieces he’d acquire which contributed greatly to major collections like Norweb, John J. Ford Jr., dealing directly with those collectors or through George’s friend colonial coin specialist dealer Dick Picker. Many of the really great collections [dispersed] by auction in the fairly recent past owe their prominence and relative completeness to George Fuld.”

Collector Barry Tayman knew Dr. Fuld and his wife for more than 40 years.

“Early on, he kindled the spark that helped me transition from filling holes in coin albums to becoming a numismatist, as I developed an understanding of the history, and importance of the nontraditional areas of the hobby (Colonial coins, tokens, and medals),” Tayman said. He added that he developed an interest in Canadian tokens and medals, “which was greatly advanced by the acquisition of George’s extensive Canadian numismatic library.”

Fellow token and medal researcher and author David E. Schenkman said he began corresponding with Melvin and George Fuld in the mid-1960s, and visited George Fuld and his wife for the first time in the early 1970s.

“He had a huge inventory, mostly from his personal collection. I recall that on my first trip to his house I purchased, among other things, his entire collection of Civil War sutler tokens and also a large percentage of his hard rubber token collection,” Schenkman said. “Acquiring a large quantity of rare material was great. Even better was spending time with George discussing tokens. He shared his knowledge freely with me, and I certainly benefited numismatically as a result of the visits.

“Although his name is associated with tokens, he was knowledgeable in other areas of numismatics as well. In my opinion, George was one of the numismatic pioneers of his time,” Schenkman said.

Additional reflections about George Fuld can be found in Q. David Bowers’ “The Joys of Collecting” column on Page 24 of this issue.

Fuld is survived by his wife, Doris. He is the father of Terry (Alan) Dressin, Jeffrey (Rebecca) Cohen, Robert (Sara) Fuld, Andrew (Carol) Cohen and the late Steven Alan Fuld. He had 12 grandchildren and two great grandchildren.

Sol Levinson & Bros. Inc. in Pikesville was in charge of arrangements. ¦