The 1962 Nobel Prize for Physiology or Medicine awarded 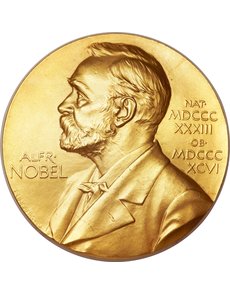 The 1962 Nobel Prize for Physiology or Medicine awarded to Dr. Francis Harry Compton Crick, along with Drs. James Dewey Watson and Maurice Hugh Frederick Wilkins, for "...their discoveries concerning the molecular structure of nucleic acids and its significance for information transfer in living material" will be auctioned with an opening bid of $500,000 when it comes across the block at Heritage Auctions on April 11 as the highlight of the company's Historical Manuscripts Signature® Auction.

The auction of the medal is a historic moment, marking the first time that a Nobel Prize has been sold at public auction. It has been kept in a safe deposit box in California since Crick's widow passed away, and has been consigned to auction by his heirs.

"This year marks the 60th anniversary of the historic discovery of the structure of DNA and 50 years have passed since Francis Crick was awarded the Nobel Prize," said Kindra Crick, granddaughter of the famous scientist and spokesperson for the family. "For most of that time, the Nobel Prize and the unique personal diploma have been locked up. By auctioning his Nobel it will finally be made available for public display and be well looked after. Our hope is that, by having it available for display, it can be an inspiration to the next generation of scientists."

In addition, the Prize's proceeds will again be used to promote ground-breaking scientific research, as a portion of the sale will be awarded to the new Francis Crick Institute in London set to be completed in 2015.

"The discovery of the structure of DNA launched a scientific revolution and forever changed human understanding of life," said Sandra Palomino, Director of Historical Manuscripts for Heritage Auctions. "This medal is the embodiment of the respect and recognition that came with that momentous breakthrough."

Crick showed an aptitude toward science at an early age, receiving a Bachelor of Science in Physics from University College London at the age of 21. He met James D. Watson (b. 1928), a 23 year-old American postdoctoral zoologist with a background in genetics, in 1951. The two men, discovering a shared common goal of solving the molecular structure of deoxyribonucleic acid, or DNA, became close friends and partners.

Crick, alongside Watson and Wilkins, received his Nobel Prize from the hand of King Gustav VI Adolf of Sweden at the Stockholm Concert Hall on Dec. 10, 1962. Rosalind Franklin, who also contributed to the discovery, died in 1958 before the Nobel was awarded. It is not awarded posthumously.

Crick's initials are engraved on the reverse of the medal, along with the year of the prize, 1962, presented in Roman numerals: "F. H. C. Crick/MCMLXII." The second piece of the Prize, the Nobel diploma — two beautifully handwritten, vellum pages, 9.5" x 13.5", in Swedish, dated Stockholm, October 18, 1962 — is also included.