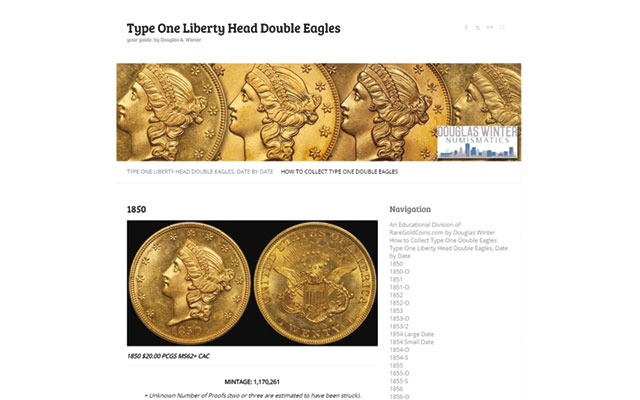 Each date and Mint mark for each gold coin for Doug Winters's online reference on Coronet or Liberty Head $20 double eagles will be heavily researched and illustrated. 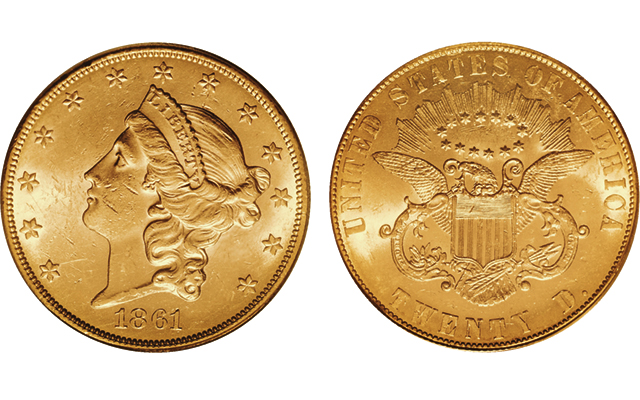 The 1861 Coronet, Paquet Reverse double eagle Winters purchased for a record $1.645 million in 2014 will have own dedicated reference pages online.

Numismatist and U.S. gold specialist Doug Winters is publishing online a numismatic reference on U.S. gold Coronet $20 double eagle coins that can be updated as new information is uncovered, without collectors having to buy a new copy of a print version.

The online guide sharing his numismatic research, Type One Liberty Head Double Eagles, is an outgrowth of his 2002 print book, An Insider’s Guide to Collecting Type One Double Eagles. Winters had previously written on New Orleans double eagles in New Orleans Gold Coins: 1839-1909, published in 1992 and revised in 2006.

“After numerous starts and stops, I decided to revise the [2002] book in 2014 but with a twist: instead of publishing it in traditional book form, it is here as a web-based project,” Winter says on the book website.  “This was done for a number of reasons. The first is flexibility in updating. With a traditional book, updating it is a major chore. With the new web-based format, it will be easy for me to continually update things like Condition Census, Auction Price Records, certified population figures, hoards, and important new discoveries.

“A web-based double eagle book will have a far greater reach than a traditional published book, and this might serve to bring more new collectors into the series. It will also enable me to have interactive features such as a comments section where collectors can add their input to each issue, and expanded potential to include more high-quality color photographs than in a traditional printed book. The possibilities are endless.”

DoubleEagleBook.com does not contain any coins or other numismatic items for sale, according to Winters. The online reference is intended to provide collectors with as much information as possible so they can make wise buying choices, whether through him or other dealers specializing in U.S. gold coins, Winters said.

Winters says he plans to add on to DoubleEagleBook.com, with segments dedicated to Type II double eagles covering 1866 to 1876, and Type III double eagles from 1877 to 1907.

Type I Coronet double eagles are those that do not bear the motto IN GOD WE TRUST, which was added within the circle of stars above the eagle’s head on the reverse in 1866. Type II coins are With Motto issues that also have the denomination on the reverse presented as TWENTY D. as introduced on inaugural circulation strikes in 1850.

Type III double eagles are With Motto issues that have the denomination extended to read TWENTY DOLLARS.

All segments for all three types will be profusely illustrated with color images.

Also to have its own segment is the 1861 Coronet, Paquet Reverse gold $20 coin, of which only two examples are known. Winter paid a record $1.645 million record price when he purchased one on behalf of a collector client, a Professional Coin Grading Service Mint State 61 example at Heritage Auctions’ Platinum Night session Aug. 7, 2014, in Rosemont, Ill.

Winters said the entry for the 1861 Paquet Reverse double eagle is currently under development, with new, original research to be incorporated.

The Paquet Reverse by Mint Assistant Engraver Anthony Paquet, according to Heritage, “is essentially a copy of the [Chief Engraver James B.] Longacre design, made from new letter punches that provide a taller and more compact appearance, leaving more space between words. The rays are closer to the lettering, providing more room for the oval of stars. The actual die field is slightly larger in diameter, with a narrower rim.”

Winters divides each of the major types into two main areas — one offering a date-by-date analysis and the other providing extensive tips on different ways to collect the series, by type.

The date-by-date analysis addresses each issue by date and Mint mark, and includes information on strike, surfaces, luster, coloration, eye appeal, as well as interesting varieties, Proofs and coin hoards.

??Collecting Type One double eagles as a type coin (and Type II and III when that information is posted).

??Assembling a complete set of Type One double eagles.

??A shipwreck “mini set” (based on coins salvaged from the wrecks of the SS Central America, SS Republic and SS Brother Jonathan).

Winters can be reached through his commercial website or by telephone at 214-675-9897.