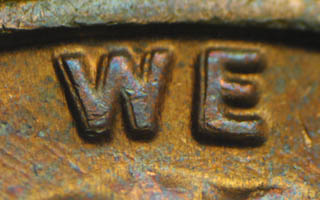 Marvin L. Young submitted this 1982 Lincoln cent with bold doubling to the letters of IN GOD WE TRUST. 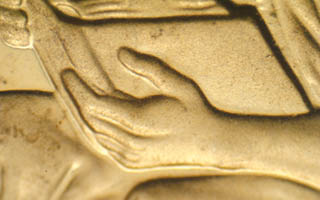 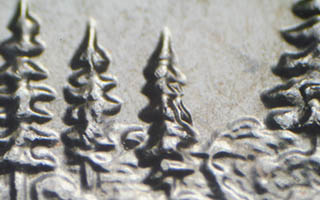 A 2005-P Minnesota quarter dollar submitted by Jim Casey Jr. shows strong doubling on the right side of the third complete pine tree to the right of the state outline. 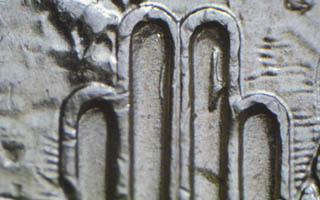 Doubling in two of the lower four rays in the Zia Sun symbol can be seen in this 2008-P New Mexico quarter dollar submitted by Andy Turnbull.

Another classic Lincoln cent doubled die variety crossed my desk this past month thanks to Coin World reader Marvin L. Young. Young submitted a 1982 Lincoln, Large Date copper cent with a bold obverse doubled die. A strong Class V clockwise spread from a pivot near the rim at approximately 5:00 shows on IN GOD WE TRUST and LIBERTY.

The Combined Organizations of Numismatic Error Collectors of America lists the variety as 1-O-V while Coppercoins recorded it as 1DO-002. It was deemed noteworthy enough to be included in The Cherrypickers’ Guide to Rare Die Varieties where it is listed as FS-01-1982-101 (034.5).

Coin World reader James Daniels submitted a Proof 2009-S Lincoln, Formative Years cent with a new doubled die reverse listing. A partial extra index finger can be found just above the normal index finger. I now have this one listed as 2009-S 1¢ FY WDDR-007. The 2009 commemorative Lincoln cents were a hotbed for the discovery of minor doubled dies throughout that year and extending well into 2010.

A 2005-P Minnesota quarter dollar with a very nice reverse doubled die was submitted by Jim Casey Jr. A large partial extra tree can be seen touching the center right side of the target tree (the third complete tree to the right of the state outline).

I have it listed as 2005-P 25¢ MN WDDR-013 and while it is not a new listing, it has proven to be extremely elusive to those seeking the variety after its discovery in 2005.

Capping things off this month is another State quarter dollar with a doubled die reverse. This one is on a 2008-P New Mexico quarter dollar submitted by Coin World reader Andy Turnbull. Doubling shows on the lower left side of the second and third rays of the lower four rays in the Zia Sun symbol that is seen over the state outline. This one is a new listing for my files where I have it recorded as 2008-P 25¢ NM WDDR-007.