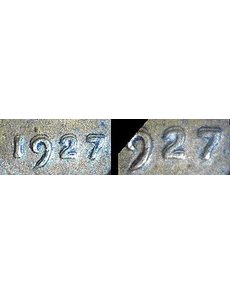 A 1927 Lincoln cent shows characteristics of “machine doubling,” a form of damage caused when loose parts in a press permit the die to bounce on the surface of a just-struck coin. However, it is not a “doubled die” coin.

We had a customer come into our shop with a 1927 Lincoln, Wheat cent that appears to have doubling of the date. I have not heard of this date having any die doubling. We would appreciate any information and comments you may have.

Die doubling, especially when it is strong, is an especially desirable form of die variety, and it can add a considerable premium on some coins, such as the strongly doubled 1955 and 1972 Lincoln, Doubled Die Obverse cents.

However, many forms of doubling exist, not all of which carry the same high premiums.

The 1927 Lincoln cent in question does not feature die doubling, but what is classified as “machine doubling,” and sometimes called “strike doubling.”

This form of generally minor error occurs during the minting process, when loose parts in a Mint press permit the die to bounce on the surface of a coin that has just been struck. The bouncing die shears or pushes the edges of the raised designs on the coin to one side, causing the doubling.

This type of damage is unrelated to doubled die coins and multiple-struck coins. Typical examples of this error, such as that on the illustrated coin, add little to no premium value to a coin.

Collectors interested in finding out more about this and other types of coin errors are encouraged to visit the Combined Organizations of Numismatic Error Collectors of America website at http://conecaonline.org.

I believe the Morgan dollar replica featured in the Oct. 22 “Readers Ask” could be a “Bryan dollar” from the election of 1900. William Jennings Bryan ran on a platform of free silver and many such artifacts were created. See the Schornstein catalog of Bryan money.

Though the book Bryan Money by Fred Schornstein does list a number of items derived from the Morgan dollar design, the Morgan-type pieces cataloged appear much more crudely struck than the 3-inch diameter, 58.2-gram piece of uncertain composition featured in the Oct. 22 column.

As well, the “Readers Ask” piece carries the same denominational legend (ONE DOLLAR) as that featured on a Morgan dollar, while Bryan money usually has alternate legends — for example, 16 TO 1, SIXTEEN TO ONE or A DOLLAR’S WORTH FOR A DOLLAR.

“Readers Ask” gladly welcomes comments and feedback on items featured in the column.