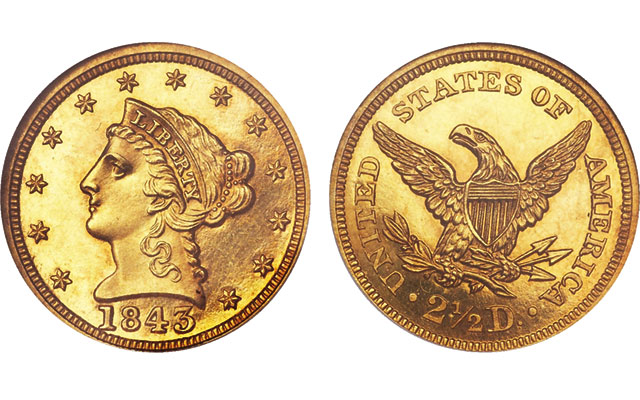 A rare 1843 Coronet $2.50 quarter eagle in NGC Proof 63 Cameo sold for $70,500. Although the Philadelphia Mint started selling Proof sets broadly to collectors in 1858, Proofs were produced in limited quantities in the decades before. Heritage writes, “Proof gold coins of the pre-1858 era are especially elusive, as few numismatists could afford to collect coins with such high face value in the mid-19th century.” Also elusive are Mint records of Proof coin production in the 1840s, and the description adds, “We can assume that at least five gold proof sets were produced that year, as five examples of all the gold denominations issued in 1843 have been reliably reported in proof format.”

Of the five sets, two remain intact. One is in the National Numismatic Collection and the other one is in a private collection, last appearing in public auction at the sale of Amon Carter’s collection in 1984. A third set was assembled by John Jay Pittman.

Heritage adds that the present example is “a pleasant surprise for collectors of early Proof gold,” being off the market and unreported. It potentially was offered as part of B. Max Mehl’s May 1950 Golden Jubilee Sale, although the image in that catalog is not clear enough to provide specific identification. The coin in the B. Max Mehl sale was described as “almost priceless” by Mehl and that description cites another example offered in 1946 that brought $275.

Describing the offered example as “delightful,” Heritage warned, “It may be decades, or even a lifetime, before another example of this rare proof gold issue becomes available again.” The roster of five known examples includes another graded Proof 63 Cameo by PCGS that was part of the Pittman set, and two other examples in private collections.