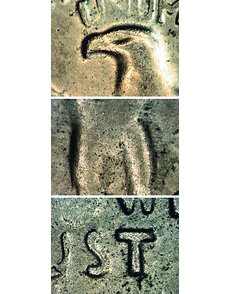 The raised portions of the Washington quarter dollar design are rough and lumpy where the details meet the fields. This is most evident surrounding the eagle’s head, top photo, the eagle’s legs, middle photo, and around the letters of the motto in god we trust, bottom photo.

One of the more interesting and expensive error coins is the double-denomination error, where a normally struck coin ends up in the blank bin for a different denomination.

In this case a 1963-D Jefferson 5-cent coin was overstruck with 1963-D Washington quarter dollar dies.

The characteristics of a double-denomination error become complicated when a counterfeiter decides to get into the act.

This particular coin is a genuine 1963-D Jefferson 5-cent coin that was overstruck with fake Washington quarter dollar dies that were produced using the spark erosion method. This type of fake die typically will have rough, ragged design elements and proof-like fields.

Note in the accompanying images how the raised devices of the Washington quarter dollar design are rough and lumpy where the details meet the fields.

While the surfaces and devices on a genuine error coin will often exhibit some roughness and uneven striking, a fake error struck with spark erosion dies will be exaggerated by comparison.

On the illustrated coin, the three areas shown in the images are the eagle’s head, the eagle’s legs, and the letters in in god we trust.

Other parts of this fake error also exhibit unusual roughness, but these areas show the diagnostic lumps and bumps better than the rest.

A number of fake error coins have been produced using spark erosion dies over the last few decades, so this is something to watch out for.

When in doubt, it is always best to consult with an error specialist, someone who has had the opportunity to inspect both genuine and fake errors in quantity.

Like so many other offerings in numismatics, if it seems too good to be true, it probably is.