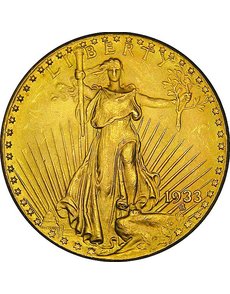 I’ve written about the Langbord 1933 Saint-Gaudens gold $20 double eagle case since it began, and had a small role to play in it myself, having written and filed a “friend of the court” brief for the Professional Numismatists Guild.

After many long and sometimes excruciating twists and turns, the case was finally tried, producing a unanimous jury verdict in favor of the government and its retention of 10 1933 double eagles.

I think many people were surprised at this outcome, thinking that there would be a settlement right before trial (“on the courthouse steps,” as lawyers say), as there was with Stephen Fenton and the “Farouk” specimen.

Others felt that the jury would rule for the Langbords out of sympathy with the elderly Joan Langbord or antipathy toward the government. It didn’t happen, and there are some lessons to be learned here.

First, do not underestimate the government’s attitude toward these coins or its willingness to go “all the way” to recover them.

Decades have passed now since the legalization of gold ownership, and today the government itself is the largest retail dealer in gold coins.

But the government’s stubborn insistence that any 1933 double eagle that is found in private hands must be traceable to Israel Switt — and be stolen property — transcends the passage of time and the dramatic changes in how gold ownership is viewed.

Truly, as I’ve said many times, you’d think the government has better things to do than fight U.S. citizens to recover old coins. Quite apart from the valuable U.S. attorney time and resources involved in years of litigation, it seems the government spent hundreds of thousands of dollars for expert fees alone in this case. Sound crazy in our country’s current economic circumstances? Don’t underestimate the government.

Second, and a corollary of the first point, don’t assume the government will ever settle one of these claims.

That kind of thinking caused the Langbord family to put their 10 coins in the government’s hands in the first place. As one of my mentors once told me years ago, “the government is not your friend.”

Well, maybe sometimes it is, but not in the case of 1933 double eagles.

Third, the American people, as represented by the jury, are not as skeptical of their government as some might believe. In my view, the verdict depended upon the jury’s having believed (1) reports from Secret Service investigations in the 1940s concerning the 1933 double eagle, which were allowed into evidence over the Langbords’ objections, and (2) U.S. Mint records from the 1930s and 1940s that, although admittedly incomplete and inconclusive, nevertheless contain no evidence of these coins having left legally.

Despite the government’s victory, I don’t think this is the end of the story for 1933 double eagles, and not just because the Langbords may appeal.

Unfortunately for anyone who may come forward with one or more 1933 double eagles in the future, the government will probably seek forfeiture on the grounds that all such coins derived from Israel Switt, and the burden will effectively be placed on the owner to explain how his or her coin left the Mint.

But maybe someone will be able to meet that burden.

Armen R. Vartian is an attorney and author of A Legal Guide to Buying and Selling Art and Collectibles.