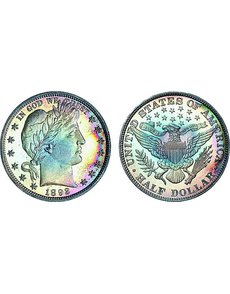 During a 1950s Penn-Ohio Coin Clubs show, business was so poor that even a gem Proof Barber half dollar — like the 1892 example shown, priced at less than $20 — did not attract a buyer because there were no customers on hand.

Psst! Don’t tell anyone, but I’ve seen a revival of some old-time traditions recently.

First, the Whitman Coins & Collectibles Expo held a few weeks ago in Baltimore drew a record crowd, edging out the 2010 numbers. Just about everyone with whom I talked said it was a great show.

Perhaps the most dynamic convention I ever attended, from the standpoint of doing business, was in 1957 at the American Numismatic Association gathering in Philadelphia. From morning until night, people were standing in line to see me at my bourse table. I was a one-person operation, and at the end of the first day I caught some rest for more of the same the next morning.

In recent years many if not most coin shows have been very slow. Events that are reported as being dynamic by publicists and show operators are often quite sleepy in reality. The worst show I ever attended was in the 1950s, at a Penn-Ohio Coin Clubs event. At the end of the third day of sitting at my bourse table I had sold not a single thing! And, William Fox (“Foxy”) Steinberg, who had a table next to mine, had no sales either. So, we each decided to spend $300 with the other.

From him I bought a rare encased postage stamp, and I don’t recall what he bought from me. Lest you sniff and say that $300 was a trivial amount, in those days a gem Uncirculated 1909-S Lincoln, v.d.b. cent, today worth thousands, sold for perhaps $40 if I could find a buyer, and gem Proof Barber half dollars retailed at less than $20 each (again worth thousands now).

Upon contemplation, in the days of yesteryear there were good shows and bad shows, but the good ones were predominant. Now, dealers can sit in their offices in front of a computer and have a “convention” on the Internet.

On April 11, I shared the podium with Anne Bentley (numismatic curator of the Massachusetts Historical Society) and David Sundman (CEO of Littleton Coin Co.) in a program for the joint meeting of the Boston Numismatic Society and the Currency Club of New England, an event arranged by C. John Ferreri and his helpers.

Although a large hall was on hand, John requested that nonmembers reserve in advance. So many people wanted to attend that the week before the event he had to cut off the applications!

Now, when is the last time you heard of a coin club meeting (actually a combined meeting here) going beyond standing room only and being completely sold out? Another nice trend!