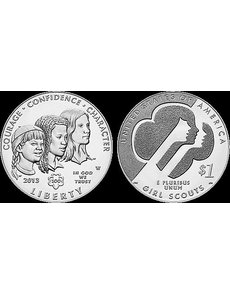 The top toy requested by girls in 2013 was, as you might have guessed, Barbie, according to the National Retail Federation.

Given there are 3.2 million Girl Scouts and adult advisers, we can assume that a good portion of them also asked for or gave a Barbie sometime between Thanksgiving and New Year’s Day.

My New Year’s wish would be that some of those Girl Scouts also got the 2013 commemorative silver dollar honoring the organization’s centennial. Such a gift would introduce more girls to our hobby.

Can a coin compete with a Barbie? The doll ranks as one of the most successful toy products ever created. One database claims two Barbie dolls are sold every second somewhere in the world.

The 2013 Holiday Barbie Doll sells for about $35. The Girl Scout silver dollar, one of the most attractive designs of the U.S. Mint, was sold at $55.95 for the Uncirculated version and at $59.95 for the Proof coin. Sales by the Mint ended Dec. 31, but they are available in the secondary market.

The coin is especially striking in Proof, mainly because of the stylized and textured profiles of three Scouts on the obverse. The mirrored surface reflects black and white like few other recent modern proof coins.

The obverse is particularly fetching. It features three levels of Scouting — depicting the various age groups and ethnicities inherent in the organization — with the Girl Scout motto: “Courage, Confidence, Character.”

The obverse also has a simple numeral “100” placed inside a trefoil symbol, signifying the centennial anniversary of the organization.

Unlike some modern commemoratives, both obverse and reverse have ample fields, further enhancing the design.

The three depictions of girls on the obverse metamorphose into the triptych of iconic silhouettes on the reverse, positioned in an upward trajectory.

Those girls and their profiles are as beautiful as any Barbie, at least in my view.

I introduced my own 10-year-old grandchild, Angelina, to the hobby with a silver dollar rather than a Barbie doll.

That’s not to say she didn’t also get a Barbie.

In August 2013, the Girl Scouts formed a partnership with Mattel to create the “Barbie Be Anything, Do Everything” patch.

In as much as Barbie has enjoyed 135 livelihoods over the past 50 years, the patch encourages girls to seek a variety of career opportunities.

Maybe if more girls received a Girl Scout commemorative silver dollar, one of those careers might be numismatist.