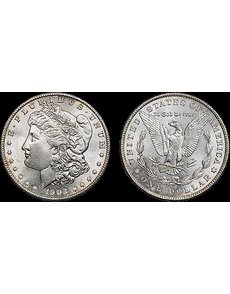 With rare coin auctions, anything can happen.

That the numerically lowest graded coin would bring more than two higher graded coins is unusual, but not unheard of in a market that continues to pay big premiums for gorgeous coins.

This market fact was evident in other lots in the sale, including some gorgeous Carson City Mint dollars. A flashy 1884-CC Morgan dollar graded MS-67 with a green CAC sticker sold for $7,344. Two weeks earlier another bright PCGS MS-67 example of this issue brought $3,529 at auction.

This price becomes far more impressive when one considers that a toned 1892-CC dollar graded PCGS MS-64+ with a green CAC sticker realized $4,406.25 at an April 26 auction.

Other coins were right on the money, realizing what was expected. The sale offered three PCGS MS-62 1893-CC dollars — two with green CAC stickers. Each one brought $5,141, consistent with recent auction transactions and only slightly higher than the $4,935 that a PCGS MS-61 example with a green CAC sticker realized at the New Orleans convention auction.

But Morgan dollars weren’t the only dollars that brought the heat.

A 1977-D Eisenhower dollar graded MS-67, tied with five others for the finest graded at PCGS, realized $4,700. Back in 2006 another PCGS MS-67 example sold at auction for $6,037.50, although at that time it was one of just four comparably graded examples. That same example also sold in 2001 for the same amount, although 12 years ago it was one of just three comparably graded pieces. ¦