Readers Ask: Not all Australian $1s are same 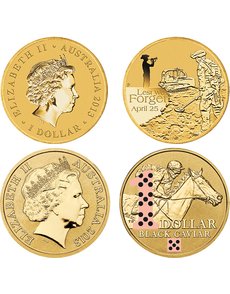 Courtesy of the Royal Australian Mint and the Perth Mint.

I look with interest at the monthly New Issues listing and can’t help but be confused by the dollar coins from Australia.

Some are made from precious metal and some are not, and some coins are larger and heavier than the others.

How is a collector supposed to tell the difference?

The issue arises because Australia has two government-owned mints that operate independent from each other.

In 1988 Australia replaced the $1 bank note with a circulating $1 coin. The $1 coin is struck from an aluminum-bronze alloy, measures 25 millimeters and weighs 9 grams.

In addition to the occasional new design for circulation, the Royal Australian Mint issues many non-circulating legal tender base metal $1 coins. These are the same size and weight as the circulating issues but many feature applied color. A recent example is the Black Caviar Racehorse dollar.

Also, the Royal Australian Mint issues silver dollars with varying themes that differ from the circulating and noncirculating base metal dollars in size and weight.

The Perth Mint also issues an abundance of collector coins, and the dollar coin figures prominently in those programs as well.

The base metal dollar coin from the Perth Mint weighs 13.8 grams and measures 30.6 millimeters, and occasionally sports color but most often does not. Sometimes these coins are sold individually and sometimes the coins are issued only as part of philatelic covers issued in conjunction with Australia Post. One recent standalone issue honors engineers of the ANZAC forces.

These dollar coins should not be confused with the Perth Mint’s bullion silver dollars, which annually celebrate a Lunar animal, as well as Koalas and Kookaburras.

This scenario is similar to the situation in the United States: Native American and Presidential dollar coins, are struck in an alloy and size different from U.S. commemorative silver dollars, like the 2013 Girl Scouts Centennial silver dollar.

The silver commemorative coins, in turn, differ in size, weight and alloy from the American Eagle silver bullion coin, which is also denominated as a dollar.