Dollar coins along for the ride experience new encounters 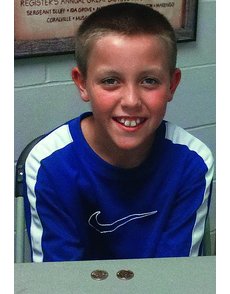 From July 24 to July 30, I participated in RAGBRAI XXXIX.

For those who are not familiar with this event, it was the 39th running of the Register’s Annual Great Bicycle Ride Across Iowa. RAGBRAI is a seven-day bicycle ride across the state. It begins each year somewhere along Iowa’s western border on the Missouri River and ends along the eastern border on the Mississippi River. Each day, riders pass through five to 10 towns along that day’s route.

Riders will typically spend $25 to $40 each day on food and drink. This may sound like a lot of money, but when you are riding 50 to 75 miles each day on a bicycle, through Iowa in the summer, your body needs a lot of food for fuel and liquids to keep hydrated.

This was my first time riding RAGBRAI and I thought it might be easier to pay for my food and drink using dollar coins instead of dollar bills during the ride. I have supported the Mint’s Dollar Coin Direct Ship Program since I first heard about it, having purchased the 2009 and 2010 Native American dollar coins as well as numerous Presidential dollar coins over the past couple of years. I enjoy educating people about the dollar coins during the course of making small purchases with them. So I grabbed an old plastic 35 mm film canister, tore open a roll of Thomas Jefferson dollar coins (the only box I still had in the house) and found out I could get almost a full roll of coins in that canister. I grabbed the fanny pack I was going to use during RAGBRAI and decided right away which pouch I could keep the coin canister in and where I would keep those few extra coins from the roll.

I brought seven rolls of Thomas Jefferson $1 coins with me to RAGBRAI. I kept the rolls in my general luggage. The night before each day’s ride, I opened a new roll and put the coins in the fanny pack. During the entire week of RAGBRAI, I purchased water, Gatorade, smoothies, pop, pie, cookies, brownies, homemade ice cream, brats, pork sandwiches, chicken sandwiches, hamburgers, pancakes, yogurt, granola, scrambled eggs, breakfast burritos, as well as a few souvenirs along the way, with the dollar coins. Buying items with dollar coins seldom ever resulted in a “routine” transaction as so many were for people who paid with dollar bills.

Some people asked if that was real money. One person thought he had gotten car wash tokens. One asked why I was being a smart aleck, paying for my stuff with those coins. I told everyone this was real money I got straight from the U.S. Mint. Most people were impressed with how bright and shiny the dollar coins were, but with long lines and many people there was seldom time for a lot of conversation. I did point out to a few people that my dollar coins stayed nice and dry in the film canister, but the dollar bills others kept in fanny packs often got wet from the humidity and perspiration.

On Day 3 of RAGBRAI, I had what I thought would become my favorite dollar coin transaction of the week. I stopped at a farmhouse between two towns where two kids and their mom had set up a stand selling ice-cold plastic bottles of water. When the brother and sister saw that I was paying for it with a shiny gold-colored dollar coin, they were fighting over who would get it. Initially I gave it to the girl, but when I saw how upset that made the brother I asked the mother if she would trade me a dollar bill for a second dollar coin for the brother. That brought peace between the kids and I hoped that might ignite an interest in coin collecting for one or both in the future.

On Day 6 of RAGBRAI, I ran into my only coin collector of the week. After the day’s ride, I was at the Coralville Recreation Center, waiting in line to pay $5 to take a shower. When I got to the table and used my five dollar coins to pay for my shower, one of the kids at the table eagerly took the coins and spread them out on the table to see which president was on them. He was a little disappointed to see they were all Thomas Jefferson as he already had that one. He told me he had recently gotten an Abraham Lincoln coin and that was the most current dollar coin he had gotten.

As I took my shower, I thought about how excited he was being a beginning coin collector and I remembered how I caught the bug from my grandfather back in the 1960s. After I finished my shower, I went back to the table to see if the boy was still there. I asked him if either of his parents were there as I would like see about writing an article for one of the coin publications about my experiences during RAGBRAI using dollar coins to pay for things.

The boy’s dad was on the other side of the building at another shower table so the boy asked if he could leave his table for a bit to find his dad. As we were walking to find him, he told me how his dad would take him to banks and that was where he got some of his Presidential dollars, but not as many as he would like. Once we found his dad, I told him how impressed I was with his son’s knowledge of coins and that I’d like permission to take his son’s picture for a coin article I was going to write. He said that was fine, but we didn’t have his son’s complete attention during our conversation.

His son had found out that someone on this side of the building had also paid for something with a couple of Presidential dollars, and he didn’t have either one of these coins. He was busy pulling out a couple of dollar bills and trading them for his new coins to put in his collector’s book.

So thank you for my favorite dollar coin transaction of the week, Joseph Verry. I wish you the best of luck over the years collecting coins, and I hope it continues to excite and motivate you as it did during RAGBRAI. ¦

Bob Carr got back into coin collecting a few years ago after “taking a few decades off” from the hobby. He is a member of the Des Moines Coin Club and Ames Coin Club. He loves bike riding but will wait for a few months before he decides if he will do RAGBRAI again next year.