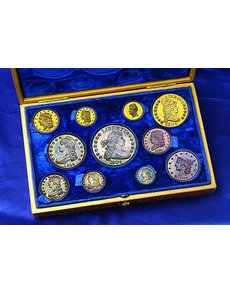 The Fantastic 1804 Dollar, by Eric P. Newman and Kenneth Bressett, ripped away the veil of secrecy from this fabled coin, as noted in last month’s column. This month, we relive a dramatic revelation that required a last-second rewrite in 1962, creating a rarity for numismatic bibliophiles.

The two authors began researching 1804 dollars in the mid-1950s, joined forces in 1959, and by July 1962, their completed manuscript was at Whitman Publications. Then it was off to Detroit for a restful annual convention of the American Numismatic Association. Restfulness evaporated at a seminar where researcher James C. Risk revealed the existence of a Proof set of American coins, including an 1804 Draped Bust dollar, which had belonged to the King of Siam (Thailand). This set, which had been delivered to the king by American diplomat Edmund Roberts, was placed on display at the convention.

In their manuscript, Newman and Bressett had argued forcefully — for an entire chapter — that old stories about 1804 dollars serving as diplomatic gifts were a “delusion.” Confronted with new evidence, Ken scrambled to the telephone and urgently asked Whitman to “hold the presses.”

How did this happen? The authors had been determined to write a fact-based book. As they put it: “Opinions, assertions, hunches, theories, assumptions, guesses, challenges or pretensions … are without real value in numismatics, unless supported by the facts.” Their research had revealed only unsubstantiated stories. In the absence of verifiable facts, they had concluded the diplomatic gift story was a delusion.

Fortunately, Ken’s call reached Whitman in time. The authors quickly rewrote the offending chapter and the book appeared only a few months behind schedule.

The final version of The Fantastic 1804 Dollar is a common volume, readily available from numismatic booksellers. But the “stop the presses” incident created a literary rarity. Prior to the 1962 ANA convention, Ken had asked Whitman to encase page proofs of the original manuscript in the same binding (brown cloth with silver lettering), that would eventually be used for the regular published edition. The bound page proofs were sent to numismatists who had helped the authors with research, with the request that they make edits and return the proofs to the authors for corrections. About 20 copies were made and most survive today, making these bound page proofs as rare as the 1804 dollars themselves (15 dollars are known)!

Any proof copy is special, and those inscribed or annotated by the authors are especially prized. However, since the proof and regular editions are bound precisely alike, how can you tell them apart? The best way is to look at the table of contents. If Chapter IX is titled “The Diplomatic Gift Delusion,” you have a proof! If Chapter IX is instead titled “The Origin of the 1804 ‘Originals,’ ” don’t cry in your beer, for you still own, according to the Numismatic Bibliomania Society, the 26th best numismatic work ever produced. Whitman agrees, for in 2009, it published a “Tribute Edition” of The Fantastic 1804 Dollar, which reprints the original, adds 58 pages of new scholarship, and boasts a bookplate signed by both authors, all bound in full leather with gold lettering.