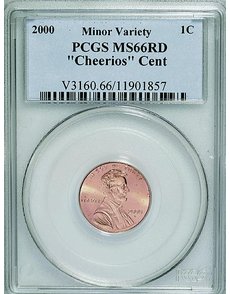 Cheerios cents sell for around $5 in original packaging, and the cents are also slabbed, right. A regular circulating 2000 cent is worth face value.

In a clever marketing move, Professional Coin Grading Service and Numismatic Guaranty Corp. are grading and encapsulating 2011 American Eagle silver bullion coins struck at the San Francisco Mint with inserts stating that the coins were produced at San Francisco.

However, it raises the question — what premium, if any, should collectors pay for a coin that looks indistinguishable from its West Point Mint counterpart? None of the 2011 American Eagle silver bullion coins struck at either facility bears the S or W Mint mark, and the U.S. Mint has stated that the strikes from the San Francisco Mint will be the same as those produced at the West Point Mint.

That grading services will designate only coins delivered to them in sealed 500-coin boxes as originally received by the U.S. Mint’s authorized purchasers harshly limits the public’s ability to certify these coins themselves.

Any additional value that the market ascribes to these San Francisco Mint coins comes from the original packaging, which is lost upon certification.

Another coin with a value that is strongly dependent on its original packaging is the “Cheerios” 2000 Lincoln cent. In 2000, Cheerios included 10 million 2000 Lincoln cents in special blister packaging with its cereal. These coins are normal — identical to the “regular” issues but for the packaging.

PCGS and NGC will both identify coins coming from the Cheerios promotion on the label, with PCGS calling it a “minor variety.” The cents rose to fame when it was discovered that the majority of the 2000 Sacagawea golden dollars included in just 5,500 of the Cheerios boxes featured a special reverse, commonly called the “Reverse of 1999.”

My colleague, Bill Gibbs, brought up an apt analogy to another collectible field where packaging matters: originally packaged Hot Wheels miniature model cars. While the No. 225 Hot Wheels from the 2002 series, a mostly red ’57 Chevy, is worth around $3 when it is loose, it is valued at $225 when packaged singularly in its original card, since the majority of the cars were released as part of an extremely limited number of sets. Same car, yet packaging makes one substantially more valuable. Yet, once removed from its package, its value returns to normal.

Next month this column will look at a similar phenomenon: value created by the PCGS First Strike and NGC Early Release designation program.