Do due diligence, then buy 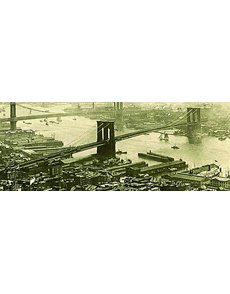 Would you buy a share of stock in the Brooklyn Bridge? This early 20th century photograph of the famous, oft-offered bridge at New York City was taken from the Singer Building.

An amazing thing about coin buyers is that a large percentage of them will lay out hard-earned money for things they know nothing at all about! As I mentioned in my column in the Jan. 17 issue, if someone called you on the phone and offered the Brooklyn Bridge, would you buy it? If not, why in the world would you buy a rare coin you know nothing about?

While someone buying a share in the Brooklyn Bridge might be able to get his (or her) money back by hiring a lawyer and trying to find the person who sold the share (which may be impossible, as fraudsters move quickly), it would have been simpler to have done some due diligence. Ditto for an overpriced, counterfeit, or otherwise phony coin deal.

This is prompted by an e-mail letter sent to editor Beth Deisher and me by Alan H., a Maryland reader, here quoted in part:

“It has become painfully evident that too many of our fellow mankind is into taking away our hobbyists/investors/publics’ hard earned money. I have heard story after story and even dealers are getting caught in well planned scams and sleight of hand antics. Is it not time that Coin World become more active and expose details of those who would rather spend their time fleecing their fellow man. I know that we have plenty of issues to deal with, but wouldn’t it be nice to list names, companies, method of operation and where they operate (for the most part) somewhere where the public can look and see if the person/entity they are dealing with are on the up and up and not someone who they need to watch, when they come near.”

I replied by stating to Alan that Coin World has indeed printed much about threats of coin doctoring, Chinese counterfeits and the like. However Coin World cannot protect people from themselves.

Then I concluded with this:

Many coin scams are, say, 90 percent factual — such as saying a coin has a low certified population, gold coins are in demand, and so on. This lulls the pigeon (naïve buyer) into thinking all is well. Then, if twice the current market is charged, the deception will be complete.

A perfect transaction! The seller is delighted. The pigeon is ecstatic — that is, until he tries to sell the coin.