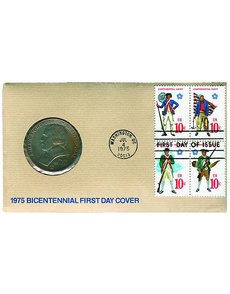 Paul Revere appears on the obverse of the 1.5-inch bronze Bicentennial medal issued in 1975 that is incorporated within this philatelic-numismatic combination with a postal cancelation for July 4, Independence Day.

In the early 1970s when collectors were all abuzz about the upcoming Bicentennial of the United States, I was taking home $110 a week as a young reporter.

We juggled the bills and rushed downtown more than once to pay the water bill before the city could cut us off.

Kids’ shoes took precedence over coins, so my collection did not grow by much then.

The papers were full of ads for Bicentennial collectibles — beautiful Franklin Mint medals, postage stamps celebrating everything from the Declaration of Independence to Colonial craftsmen and, of course, U.S. Mint coins and medals.

I salivated over all of them, but really didn’t buy anything save a couple of three-piece 40 percent silver Proof sets for $15 apiece — almost $60 in today’s money.

All this stuff was widely marketed to noncollectors. And, as its original purchasers age, it’s coming on the market in torrents.

There’s more material than collectors, and dealers have a hard time moving it. Prices are fluid, depending mostly upon how much you’re willing to pay for something you know will never be worth much.

I’m a buyer now. The kids — mostly grown and on their own — can figure out what to do with it in a few years when my bones have turned to dust. For now, I’m happy to buy the things I couldn’t afford 40 years ago for less — way less — than the issue price.

My favorite piece so far is a set of 11, 1.5-inch pewter reproductions of medals awarded by the Continental Congress to Revolutionary War commanders. The set was sold as“America’s First Medals,” in subscription style at $5 a medal in 1974 and 1975.

Bound in a slip-cased book, the set begins with the Washington Before Boston medal and includes a 43-page booklet by Vladimir and Elvira Clain-Stefanelli. I paid $25 for it and love to look at it. The dealer had several dozen, but I was happy with just one.

These were 1.5-inch bronze medals packaged in special envelopes that were stamped and postmarked on July 4 of each year.

I don’t remember what the issue price was, but it must have been several dollars. The stamps alone on the 1975 issue had a face value of 40 cents.

The medals feature patriots —Paul Revere on the 1975 — and the tiny Bicentennial logo, which is a kind of swooshy star that looked so modern then but now looks like a recycling symbol.

The dealer who sold them to me said they were so pretty and so cheap that he could not pass them by. Neither could I.