'Discovery' coin out of hiding after 30 years 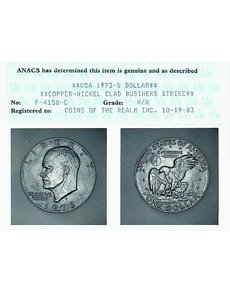 ANACS certificate from 1983 identifies Uncirculated 1973-S Eisenhower dollar as having been struck on a copper-nickel clad planchet rather than on a silver-copper clad planchet.

Images provide by the owner. 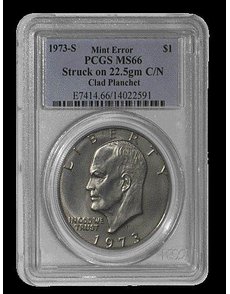 PCGS has authenticated the coin and has assigned it a grade of Mint State 66.

Images provide by the owner.

Some 30 years or so ago, a collector walked into a Maryland coin shop with a 1973-S Eisenhower dollar, an album and a problem: he couldn’t find a hole for the coin in the album.

Dealer Peter Boyer of Coins of the Realm, Rockville, Md., took the customer’s coin and album, and attempted to find a spot for the coin. He failed, and after ruling out a problem with the album and checking further, told the customer that the coin shouldn’t exist.

Two different authentication/grading services have since certified the coin as an Uncirculated 1973-S Eisenhower dollar struck on a copper-nickel clad planchet rather than on a silver-composition planchet as it should have been. It is one of maybe just three examples that have been certified and is the true “discovery” piece, even though its existence was not revealed until mid-June, after the coin’s current owner read about the discovery of two other pieces that were certified during the last few years.

Boyer, realizing in the 1980s that the Eisenhower dollar was potentially rare, bought the dollar from the customer, who also walked out of the shop with the right coin for his album. Boyer told Coin World June 26 that he believes he paid the collector somewhere in the range of $750 to $950 for the coin.

Not too long afterward, one of the shop’s regular customers paid a visit to the store. The Maryland collector had been a loyal customer of the company since the firm’s founding in 1974 (and still is, according to Boyer) and had just become interested in error coins in the early 1980s, so Boyer mentioned the coin to him when he asked if Boyer had anything “interesting.” The collector recently told Coin World he “took a chance” and bought it; both Boyer and the collector (who has asked Coin World for anonymity) recall that the price paid was about $1,500.

The parties to Boyer’s original purchase and then sale of the coin to the Maryland collector are a little unsure of the timing because decades have passed, but at some point, as part of one of the transactions or during transaction negotiations, the coin was sent to ANACS for certification. The coin was returned with a certificate dated Sept. 19, 1983, and registered to Coins of the Realm.

The coin has rested in the Maryland collector’s collection for decades, its existence not widely known. Then the collector read a story in Coin World’s Aug. 1, 2011, issue about the discovery and authentication of the “second” known example of the coin, which had been certified by Numismatic Guaranty Corp. and given a grade of About Uncirculated 58.

This “second” piece had been obtained by a collector at a California bank at face value.

That 2011 article also mentioned as the “discovery” specimen a piece acquired in 2008 and also certified by NGC, given a grade of Mint State 67. That piece was initially acquired as a regular Uncirculated 1973-S Eisenhower silver-copper clad dollar and was not authenticated as an error until later.

At the time of the 2011 article, the collector community was generally unaware of the piece ANACS authenticated in September 1983. However, the owner of this original “discovery,” having read the recent coverage, has decided to make public the existence of his coin and the story of its discovery.

What makes the coin unusual?

The collector’s coin was struck from Uncirculated coin dies on a planchet intended only for a Proof edition with the 1973 date and S Mint mark.

The 1973-S Eisenhower silver-copper clad dollars were sold individually — the Proof coins were placed in a hard plastic holder that was housed in a brown cardboard box (the “Brown Ikes”), with the Uncirculated silver versions placed in a soft plastic holder that was then inserted into a blue envelope (the “Blue Ikes”). The copper-nickel clad Proof versions of the coin were placed into the six-coin 1973-S Proof sets.

With the San Francisco Assay Office (the then official designation of what today is again known as the San Francisco Mint) striking both Uncirculated and Proof versions of the 1973-S Eisenhower dollar, and with planchets of both compositions in play, it is possible that some planchets made of the copper-nickel clad composition, intended only for Proof production, were mixed with the silver-copper clad planchets being used to strike Uncirculated versions.

The Maryland collector who recently revealed the existence of his coin also reflected on his purchase.

“One day ... I wandered into the store just to see what interesting coins they had and they showed me the 1973S dollar,” he writes in an email.

“We all discussed the coin recognizing that it could be one of a kind or that additional specimens could be discovered. Our collective guess was that it was not likely that it was a common error since nobody who worked there had heard or seen another example of this error and this was almost 10 years after the mint date.”

The collector continued: “I was trusting them because for me they were the experts and I was a collector with limited access to a lot of data. Recall that this was before the internet. So I took a chance and bought it.”

A few years ago, he decided to have the coin slabbed, so he arranged for Coins of the Realm to send it to Professional Coin Grading Service for grading. PCGS graded the coin MS-66.

As for why he finally decided to come forward to reveal the existence of the coin and its history, the collector said: “Since I owned this coin and recognized that it is rare I would occasionally search the internet for other specimens of the same error. I remember reading with a smile the discovery of the ‘first’ 1973S and more recently I discovered [Coin World’s 2011] article about the second known specimen. I figured that it was time to just get this out there as well so that the collecting community can get an accurate count of the number of 1973S errors that exist.”

For now, the collector community knows of at least three pieces. Could there be more?

Collectors should look closely at their Uncirculated 1973-S Eisenhower dollars in the blue packaging or at those pieces in their albums that they removed from their original U.S. Mint packaging.

While both compositions used for the dollars in 1973 are clad compositions, the demarcation between the center core and the outer layers is much more obvious on the copper-nickel version than on the silver-copper coins. The pure copper core sandwiched between two layers of copper-nickel should be easier to identify than the silver-copper core on the precious metals versions.

Any pieces suspected of being of the wrong composition should probably be submitted to an error specialist or grading service for attribution and authentication.

According to the Maryland collector, the coin is probably the most valuable piece in his collection, which also holds such pieces as a 1955 Lincoln, Doubled Die Obverse cent, “but since there is no established market for this coin [its value is] just an educated guess.”

As far as Coin World could determine, the 1980s transactions are the only ones for an example of the coin in which the seller and buyer recognized the piece as an error. In earlier news coverage about one of the other examples, error coin specialists were cited as stating an example of the coin could bring from $5,000 to $10,000 if it were to sell today.

Nonetheless, “I plan to keep the coin — I’m in my 50s and have no current intention to sell it,” the Maryland collector said.

He added, “When I started collecting coins at Coins of the Realm in the 1970s I was not old enough to drive and my parents had to take me there. So despite the fact that I have owned the coin almost 30 years I have some years to go before I would consider selling it.” ¦