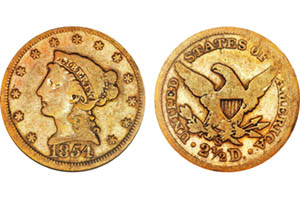 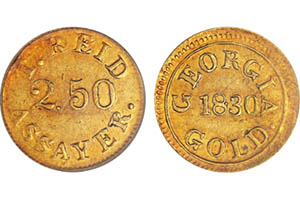 Templeton Reid privately struck $2.50, $5 and $10 coins from Georgia-mined gold to meet local monetary needs. The quarter eagle example, shown, is one of fewer than 25 pieces believed to exist from an estimated production of 1,000 pieces. 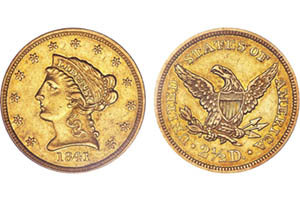 The 1841 Coronet $2.50 gold quarter eagle is debated among numismatists as to whether the issue was struck in Proof and circulation strike versions.

The discovery example of the 1854-S Coronet gold $2.50 quarter eagle is making an auction appearance March 20.

Graded Good 6 and encapsulated by Professional Coin Grading Service, the discovery coin is one of 596 lots comprising the Donald E. Bently Collection to be offered March 20 in San Francisco by Heritage Auctions.

According to Heritage, the net proceeds from the Bently auction will be used by the Bently Foundation to fund building “a new legacy of creativity, sustainability and animal rights in the Bay Area of Northern California and in Northern Nevada.”

In addition to the 1854-S quarter eagle, the Bently Collection includes numerous other rarities, such as an 1841 Coronet quarter eagle, dubbed the “Little Princess,” graded PCGS Proof 53, and an 1830 Templeton Reid $2.50 pioneer gold piece, graded PCGS About Uncirculated 55.

The 1854-S Coronet quarter eagle is one of only 246 of the gold $2.50 coins struck at the San Francisco Mint dated 1854, and one of just 12 examples from that mintage confirmed to have survived.

Why only 246 quarter eagles were struck at San Francisco in 1854 is open to speculation.

The commonly held theory blames the San Francisco Mint’s difficulty in obtaining acids to part the gold from the native California gold during the facility’s inaugural year of production. However, the production of larger quantities of gold dollars, $10 eagles and $20 double eagles may cast doubt on that theory.

The coin in the Heritage auction is considered the discovery 1854-S quarter eagle. It counts among its previous owners such numismatic luminaries as H.O. Granberg, Elmer Sears, John H. Clapp and Louis E. Eliasberg Sr.

In his 1909 Official Premium List of United States, Private and Territorial Gold Coins, numismatist Edgar H. Adams showed “no record of public sale” for an 1854-S quarter eagle. A few years later, Adams published a May 1911 article in the American Numismatic Association journal, The Numismatist, identifying the existence of an 1854-S Coronet quarter eagle in H.O. Granberg’s collection.

While the Bently coin is graded just Good 6, the finest known example of 1854-S quarter eagle is graded About Uncirculated 53 by Numismatic Guaranty Corp.

Bently’s 1830 Templeton Reid $2.50 pioneer gold piece is cataloged as Kagin 1 in Private Gold Coins and Patterns of the United States by Donald Kagin.

With extensive experience as a watchmaker, gunsmith, and metalworker, Reid is considered to be the first issuer of private gold coinage in the United States.

For several months in 1830, Reid struck $2.50, $5 and $10 gold coins from newly mined Georgia gold. Reid executed his production first in Milledgeville, Ga., then Gainesville, to be closer to the gold fields.

Kagin wrote in his reference, “Reid’s novel concept of privately coining money from gold dust opened the door through which more than forty different individuals and companies eventually followed, attempting to provide their communities with a viable alternative to the inadequate Federal currency.”

Reid was forced out of his private production by an unidentified adversary who claimed in published newspaper advertising that Reid’s coins were not as advertised.

According to the Smithsonian Institution’s National Museum of American History, it is estimated that Reid struck 1,000 of the quarter eagles, of which fewer than 25 examples survive; 300 half eagles, of which an estimated 10 survive; and 250 eagles, combined, in dated and undated versions, with five dated and three undated eagles known to survive.

Most of Reid’s production was remitted to the Philadelphia Mint where the private gold coins were melted for recoining into federal coinage.

The 1841 Coronet quarter eagle in the Bently Collection is one of 15 to 18 examples confirmed to exist, although no official U.S. Mint record has been found that the coins were ever produced.

The 1841 quarter eagle derives its “Little Princess” moniker from numismatist Norman Stack who identified the issue as such in the firm’s 1954 sale of the Davis-Graves Collection.

While many numismatists consider the 1841 to be a Proof-only issue, some uncertainty exists as to whether the Philadelphia Mint struck both Proof and circulation strike examples in 1841, based on observations of the surfaces of known coins.

Those who subscribed to the Proof-only premise believe the coins were struck for inclusion only in presentation sets.

Others argue that fewer than a half dozen of the known pieces are strictly Proof examples, since the clear majority show signs of wear, but not the impairment to the surfaces that one would expect from an impaired Proof.

Numismatic Guaranty Corp. continues to regard the 1841 quarter eagle as a Proof only issue, with five submissions reported.