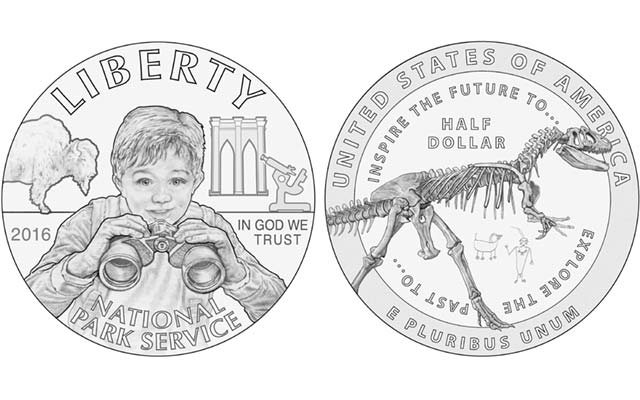 CCAC-recommended designs for the NPS copper-nickel clad half dollar depict for the obverse a young boy discovering the wonders of nature through binoculars. The recommended reverse depicts as its central device the skeleton of a dinosaur. 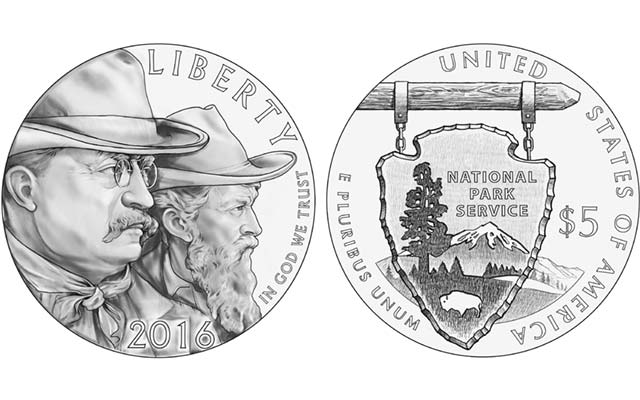 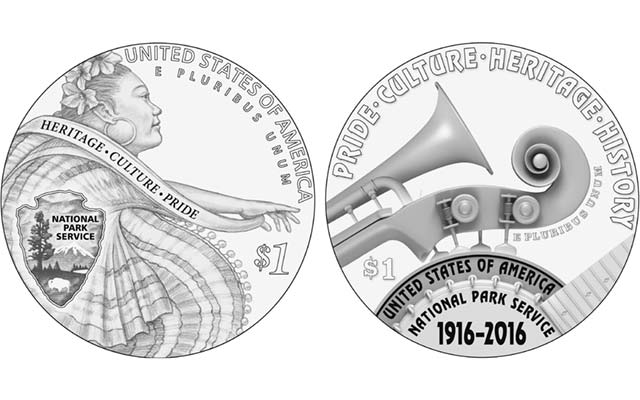 The U.S. may get its first dinosaur coin if Treasury Secretary Jacob Lew follows the June 16 advice of the Citizens Coinage Advisory Committee.

Expressing a desire to create a “kid coin” in next year’s three-coin set that will celebrate the National Park Service’s centennial, the panel enthusiastically endorsed the design showing a dinosaur skeleton for the reverse of the copper-nickel clad half dollar.

The coin’s obverse would feature a young boy with binoculars in hand looking for a far-away object. The design was originally submitted as a proposed obverse for the silver dollar.

CCAC members of the committee recommended both designs during the June 16 meeting in Washington that began with Mary Lannin, its new chair, expressing delight over the “plethora of designs” offered by Mint artists for the park coins.

Others on the panel, including former chair Gary Marks, voiced concerns that the panel’s instructions to the artists may have been too specific, producing numerous similar designs.

What seemed to bring the committee together at the end, however, was their hope that the so-called kid coin would help lure youngsters into coin collecting.

“I can get really excited about that one,” historian Herman Viola said.

“This is a happy coin,” Marks agreed.

For the $5 piece, which will be the most expensive coin in the set, the CCAC recommended jugate portraits of the two men said to be most responsible for the creation of the park system, President Theodore Roosevelt and naturalist John Muir.

Twelve of the 17 proposed obverses featured the two men, a percentage that surprised some committee members.

While some members liked the multiple drawings, the CCAC’s Michael Bugeja, an Iowa State journalism professor, said there was much “wonderful art work,” but not all of it was “numismatic artwork.”

For the reverse of the gold coin, the panel backed a design that features the park service’s arrowhead logo with the mountain on the emblem blending into a mountain in the coin’s background.

While some committee members predicted the costly gold coin would become the “label” for the set, the silver dollar was described by Erik N. Jansen as potentially “the signature coin of the set.”

For that coin, the committee pulled a proposed silver reverse featuring a twirling Hispanic dancer and recommended it for the silver obverse.

A banner saying “Heritage, Culture, Pride” would be replaced with something related to the National Park Service centennial.

The recommended reverse would show parts of three musical instruments and carry the message that the parks do much to preserve culture as they to do to preserve nature.

“We’ve got parks, parks, parks and parks,” said Donald Scarinci, a medals specialist. “Let’s not compete with what we have.”

Scarinci argued that the ongoing America the Beautiful Quarter Dollar series is giving great display to the natural side of the park system.

Scarinci wanted the sets to also show another side of the park system.

Whether the National Park Service agrees with the committee’s recommendations could be critical in what designs Treasury Secretary Lew or his designee finally selects.

Representatives for the National Park Service came to the CCAC meeting with a long list of detailed recommendations for the coins.

The committee did not address any of those concerns, but for the most part stuck to designs as proposed by the Mint’s artists.

Some of the design questions brought close votes.

The half dollar obverse recommendation was a narrow one. The winning boy with binoculars won out over a design showing a youngster examining a frog and a mountain scene.

The panel allows its members to award up to three points for any design. It totals the score and uses that as an index to the popularity of the different coins.