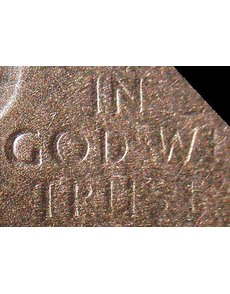 The letters of IN GOD WE TRUST are thinner than normal and fade out peripherally on the Denali National Park quarter dollar. 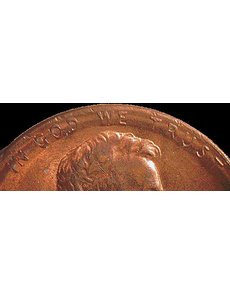 On this 1988 Lincoln cent, the letters of IN GOD WE TRUST have been thinned due to the presence of a “ridge ring.” 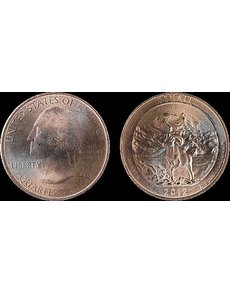 Both faces of this 2012-P Denali National Park quarter dollar show severe die wear. The design details and outlines are softened and the relief lowered almost to the level of the field. 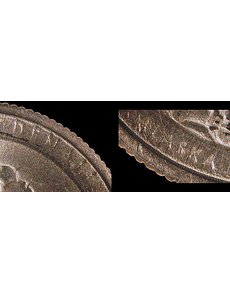 On the reverse of the Denali National Park quarter dollars, the encircling mottoes and legends have been converted into illegible smudges. Close-ups of the words DENALI and ALASKA are shown.

As a die pounds away at hundreds of thousands of planchets, the working face undergoes slow deformation that is referred to as die wear or die deterioration. Formerly crisp numbers and letters frequently become bloated and irregular, as seen on the reverse of a 1983-P Jefferson 5-cent coin featured in the Sept. 17, 2012, column. The once-smooth field often develops an “orange-peel” texture and radial flow lines.

Yet not all cases of die deterioration result in the same general appearance. A very different look characterizes an Uncirculated 2012-P Denali National Park quarter dollar.

Both faces are heavily affected by die wear. Disappearing and illegible letters are found on both faces. That’s quite unusual. While die wear often leaves a mushy design, the individual elements almost always remain recognizable. Other familiar causes of design weakness, such as a weak strike, a thin planchet or a “grease” accumulation on the dies can be dismissed on this coin.

A fine matte texture appears on both faces of this coin. I have seen similar matte textures stemming from die deterioration on Lincoln cents and other denominations.

On the obverse face every part of the design is softened and shows lowered relief. While the mottoes and legends are still mostly recognizable, their outlines are indistinct and merge gradually with the field. Die deterioration has progressed to such an extent that the Mint mark and the outer portions of IN GOD WE TRUST have almost vanished.

One interesting feature of the obverse lettering is that it is narrower than normal and the gaps between the letters are widened. This effect is best seen in the motto IN GOD WE TRUST. When one encounters attenuated letters and numbers the usual suspect is overzealous intentional die abrasion. When a die is abraded the field is lowered and the more superficial (and widest) parts of the letter recesses are removed. What is left are the narrower depths of the incuse letters. In this case, however, all evidence points to die wear as the cause.

I suspect that the entire field portion of the obverse die retreated or was worn down almost to the level of the deepest recesses of the die face. The narrow, widely spaced letters would seem to indicate that metal atoms were actually lost from the die face instead of simply being rearranged. If that’s the case, then the term “die wear” gains a level of accuracy that was not originally anticipated.

On the reverse the incuse letters that encircle the central design are largely or completely illegible. E PLURIBUS UNUM, DENALI and ALASKA have been reduced to vague smudges. The date is still recognizable, however. The elevated ring that houses these incuse elements shows abnormally low relief. It is only slightly higher than the part of the field that lies above Mount McKinley. On the die face it would seem that the central portion of the design retreated almost to the level of the floor of the recess that harbored the raised, mirror-image letters that generated the encircling design.

We can look to copper-plated zinc cents for additional examples of die deterioration that result in thin, widely spaced and partly effaced letters. A representative example is seen here in a 1988 Lincoln cent. The letters of IN GOD WE TRUST have been partly swallowed up by a “ridge ring” — a swelling that formed just inside and parallel to the design rim. Zinc cents are prone to develop such swellings. Other, broader swellings may form within the interior of the coin. A close relationship exists between such swellings and the thinning and disappearance of peripheral letters.

On the cent die itself, only the field portion of the die sinks in; the letter recesses do not. This causes the sinking field to reach the same depth as the letter recesses. As with the Denali National Park quarter dollar, it’s not entirely clear if the retreat of the die face is caused by deformation alone or by a combination of deformation and metal loss. In either case, the wider, more superficial portions of each letter recess are lost.