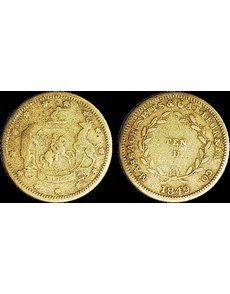 The only known die trial for an 1849 Massachusetts & California Co. pioneer gold $10 coin that was never produced in precious metal was one of the highlights in Stack’s Bowers Galleries Sept. 18 to 20 auction in Philadelphia.

The 27.5-millimeter brass die trial, cataloged as Kagin 6a in Private Gold Coins and Patterns of the United States by Donald Kagin, was graded in the auction as being Very Fine 30.

The 2,904 lots in four floor sessions were offered by Stack’s Bowers in conjunction with the Whitman Expo.

The Stack’s Bowers auction brought total prices realized of $3,910,720, which includes the 17.5 percent buyer’s fee added to the final closing hammer price of each lot won.

Of the 2,904 lots offered, 2,732 were recorded as sold, according to Stack’s Bowers Galleries officials.

Offered as part of the John J. Ford Jr. Collection, the die trial was listed as unique in both Kagin’s 1981 reference and the Bowers and Ruddy Galleries Inc. auction catalog for the March 18 to 20, 1982, sale of the Henry H. Clifford Collection.

Clifford had earlier acquired the die trial in the Abner Kreisberg-Hans Schulman auction, held in March 1965.

While no other examples of the $10 die trial are confirmed to exist, the Kagin book references an unconfirmed piece purportedly to have been struck over a button.

According to Kagin, the Massachusetts & California Co. was one of three companies formed in Northampton, Mass., in 1849 for the purpose of capitalizing on the California Gold Rush.

Kagin writes that the Massachusetts & California Co. was established not to mine gold, but to cash in on the shortage of circulating coins in California,

A May 1849 edition of the New York Tribune, according to Kagin, included an article suggesting the Massachusetts & California Co. intended to establish a private mint, buy gold at a fair price and strike up to $10,000 in coins per day for circulation.

The Tribune article suggests the company had the sanction of the federal government to strike the coins, which Kagin wrote was highly unlikely.

Kagin wrote in his book that researchers have found no evidence that the coining equipment obtained by the Massachusetts & California Co. ever made it to California.

Kagin wrote that it is believed that the Massachusetts & California Co. gold coins, struck in the $5 denomination, were likely struck in Massachusetts.

And because of the number of coins the company intended to be able to strike daily, multiple dies were likely needed to produce the $5 coins, attested to by differences in the design of known die trials.

Only a few examples of the $5 denomination are known to exist today in gold, silver and copper versions.