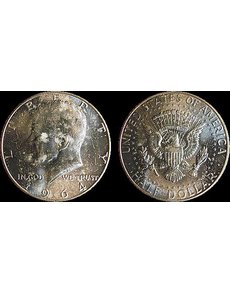 Both faces of this 1964 Kennedy half dollar show numerous craze lines that are largely confined to the field. In these two photos, the crazing shows up as short, highly reflective lines. 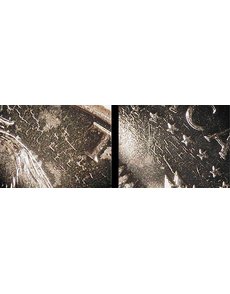 Close-ups of the field behind Kennedy’s head and to the right of the eagle’s wing show the dense network of craze lines. 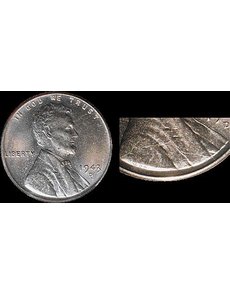 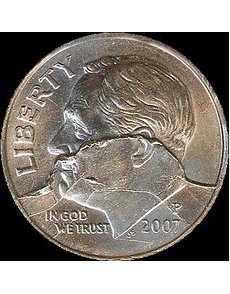 In contrast, this 2007-P Roosevelt dime was struck by a shattered obverse die.

The surfaces of hard, brittle objects can sometimes develop a meshwork of fine cracks that don’t necessarily compromise the structural integrity of the object.

The phenomenon is known as crazing.

Pottery glazes frequently develop crazing, especially with age. Polymers such as polycarbonate plastic also have a tendency to craze.

Crazing can also affect the working face of a coinage die, although it’s a rare and poorly understood phenomenon. As with any form of brittle failure, the root cause could be selection of the wrong grade of steel, excessive carbon in the alloy, a heavy impurity load, the presence of microscopic voids, or improper die preparation (annealing, tempering, quenching).

Since dies have a tendency to develop cracks, crazing is not a completely surprising phenomenon. The difference is that ordinary die cracks are at least fractionally wider than craze lines and don’t form a dense network.

Two rather different-looking examples of crazing are presented here.

Our first specimen, a 1964 Kennedy half dollar, comes from Lee Lydston. It shows crazing on both faces and largely confined to the field.

Crazing is rather dense to the left and right of Kennedy’s head and on either side of the eagle. The coin does show conventional die flow lines, indicative of a later die state.

Some of the die flow lines extend perpendicularly from craze lines, suggesting that the fine cracks either interrupted the formation of the flow lines or, alternatively, facilitated their appearance.

Our second specimen, an Uncirculated 1943-D Lincoln cent, comes from Robert (“BJ”) Neff. Craze lines are restricted to the obverse face and mainly appear on the raised design. Most of the craze lines are located on Lincoln’s coat, while a few run across his head.

While conventional die cracks will often follow an uneven path, they are nowhere near as tortuous as these fine cracks.

The 1943-D cent also shows fine raised concentric lines on the obverse face that are best seen in the center. These are concentric lathe marks. After machining, the cone-shaped head of the blank, working die is supposed to be polished smooth.

If this step is skipped or performed in a slipshod manner, the grooves left by the lathe will persist, even after hubbing. There is no reason to suspect that the concentric lathe marks are related to the crazing.

Crazing should not be confused with shattered dies. While shattered dies are highly variable in appearance, what unites them is the presence of numerous intersecting die cracks.

Shattered dies can show a mixture of the two forms of die cracks.

Numerous die cracks (mostly bilevel) cross the lower half of the obverse design. The difference from the two specimens struck by crazed dies is readily apparent.