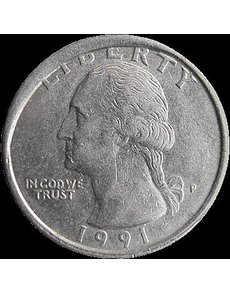 This 1991-P Washington quarter dollar shows a severe die attrition error in the northwest quadrant. The letters on LIBERTY are severely truncated. 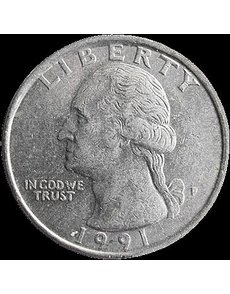 A second 1991-P Washington quarter dollar shows a modest die attrition error in the northwest quadrant. It was struck by a different die pair than used in striking the other example. 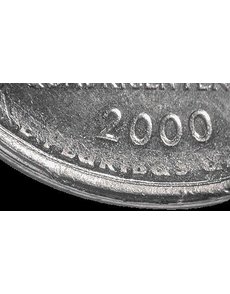 The very beginnings of a die attrition error can be seen below E PLURIBUS in this 2000-P Virginia quarter dollar. 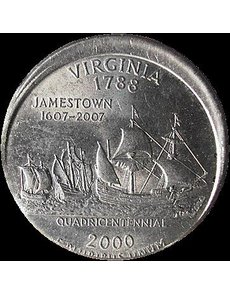 This 2000-P Virginia quarter was struck later on in the same press run when the reverse (hammer) die was misaligned toward the southwest. 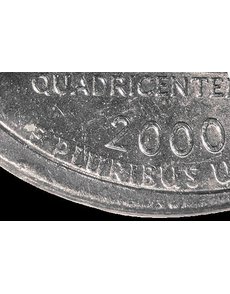 Struck late in the same press run, this 2000-P Virginia quarter dollar shows enlargement of the zone of attrition.

The most common and the most regular form of peripheral die damage is the die attrition error.

A die attrition error develops when a horizontally misaligned hammer die smacks repeatedly against the beveled entrance of the collar. The outer margin of the die face gradually wears away, leaving the coin with a featureless crescent. A die attrition error will appear on coins only after the hammer die has returned to a centered position. While the die is misaligned (and producing misaligned die errors), the eroded part of the die face lies beyond both the confines of the striking chamber and the edge of the planchet (see Collectors’ Clearinghouse, Jan. 4, 2010, and Aug. 13, 2012).

An extensive die attrition error can be seen in the northwest quadrant of the illustrated 1991-P Washington quarter dollar. The letters of LIBERTY have been severely truncated.

The steady removal of metal from the outer margin of the die face should theoretically result in a progression of coins in which the unstruck crescent grows steadily larger. But such progressions are extremely difficult to locate.

A second 1991-P Washington quarter dollar initially held promise as an earlier stage in the erosion of the die that struck the first illustrated piece. The featureless crescent is in the same location but is much thinner and has just begun to encroach upon LIBERTY. However, this coin shows much heavier die flow lines, indicative of a later die state. It’s clear that this coin was struck by a different die pair. Of course, there remains the possibility that it was struck in the same press before the installation or after the removal of the die pair that struck the first coin.

Difficulty in assembling die attrition progressions may in part be due to the rarity of such errors (they’re much rarer than marginal die breaks or “cuds”). Since die attrition errors are often misidentified as cuds (as well as other error types), many examples of this form of error are likely dispersed among a variety of unrelated categories.

Small and early-stage die attrition errors easily escape notice, making it less likely for the earlier stages of a progression to make it into anyone’s collection.

Finally, there doesn’t seem to be that much interest in this error type, so little effort has gone into assembling progressions.

I have managed to assemble one die attrition progression that consists of a series of 2000-P Virginia quarter dollars.

The progression confirms the causal mechanism described earlier. The progression was drawn from an extensive run of striking errors produced by a press beset with numerous problems (see Collectors’ Clearinghouse, Sept. 27, 2010). Errors produced by this press include off-center strikes, horizontal misalignments of the hammer (reverse) die, coins incorporating both errors, and coins documenting a horizontal misalignment of the anvil (obverse) die and collar.

All of the coins are either broadstruck (struck out of collar) or show a partial collar. The striking chamber was filled with debris, producing a steadily growing roster of die scratches. This allowed me to identify six die stages (A to F), although I expect several additional stages could exist (for more information, see the March/April 2005 issue of Errorscope, the bimonthly journal published by the Combined Organizations of Numismatic Error Collectors of America).

The first photograph from this progression shows the southwest quadrant of an example struck when the hammer die was centered and the anvil die was misaligned. It represents Die Stage A. At this stage only a little bit of the field portion of the die has been worn away.

The next example represents Die Stage E. This coin was struck with the hammer die misaligned toward the southwest — the same area that the die attrition error is developing. The obverse die was centered.

The final example of Virginia quarter dollar illustrated represents Die Stage F. When this coin was struck, the hammer die had returned to center and the anvil die was once again horizontally misaligned. The die attrition error has grown so that the field portion of the die has been worn away as far as the bottom of the letters of E PLURIBUS.

I have not seen any examples from this series that show the letters truncated, so this might represent the maximum extent of attrition.