Die abrasion by any name can be intentional or accidental 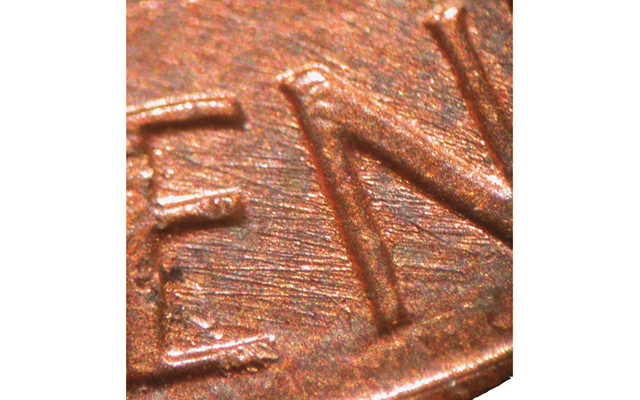 Heavy die scratches located on the reverse of this 1986 Lincoln cent were caused by intentional die abrasion. 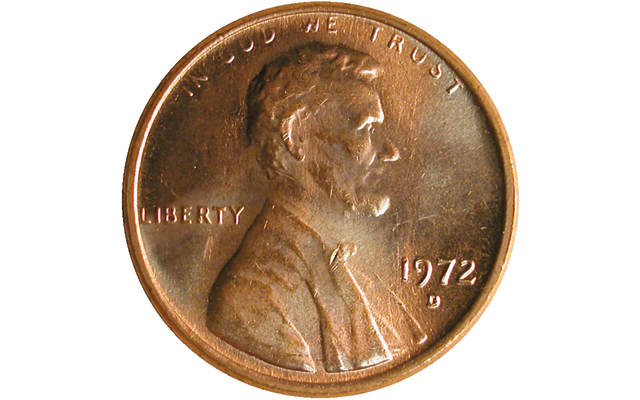 The obverse die that struck this 1972-D Lincoln cent was heavily abraded by a Mint worker. Overzealous intentional die abrasion is unusually common — and severe — in cents bearing this date/Mint mark combination. 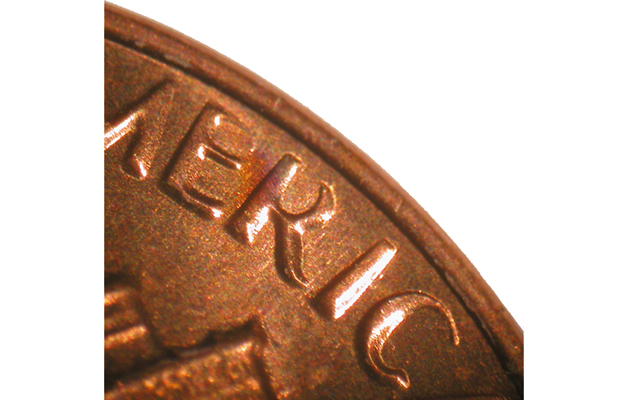 Localized intentional die abrasion has thinned-out and removed the outer portion of the letters ERIC in this 1982 Lincoln cent. 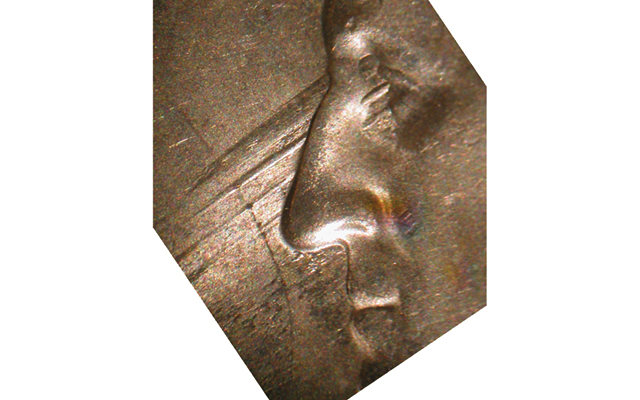 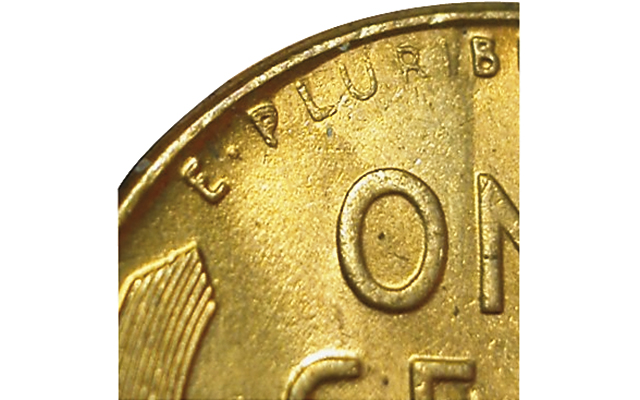 Incorporating aspects of a die dent and accidental die abrasion, the damage seen on the reverse of this 1944 Lincoln cent has left the letters LURI attenuated.
Previous
Next

Like mayflies, the average coinage die lasts about a day. In that time, it can suffer damage that is serious enough to warrant repair, but not so severe as to require permanent removal. The most common type of superficial damage occurs when dies collide in the absence of a planchet.

In the case of a relatively light die clash, the clash marks can be removed by abrasion. Intentional die abrasion has in the past been called “die polishing,” “lapping,” and “stoning,” the assorted names perhaps reflecting different techniques used over the years.

One frequent hallmark of intentional die abrasion is the presence of fine die scratches. Usually these run in many different directions, but swathes of parallel scratches are not unknown.

Shown here is a 1986 Lincoln cent with profuse die scratches that cover the reverse face. The abrasion was undertaken after the dies clashed in a slightly rotated position. For some reason, little or no effort was made to erase the clash marks on the obverse die.

Not all cases of intentional die abrasion will show die scratches, however. The scratches can slowly disappear after the die is reinstalled and strikes thousands of additional planchets.

Some abrasive techniques seem to use a much finer grit that produces a smooth surface. For example, Sacagawea dollars in which the right iris and pupil are lost to abrasion (creating the so-called “cat’s eye” effect) typically show a smooth surface.

Overzealous intentional die abrasion can lower the field portion of the die to such an extent that recessed design elements become shallower, thinner, and may even disappear. The illustrated 1972-D Lincoln cent shows the results of such an assault. Low-lying portions of Lincoln’s nose, mouth, temple, cheek, and neck have been erased. The letters of IN GOD WE TRUST become progressively thinner as they approach the design rim with some pinching out.

Intentional die abrasion can affect an entire die face or can be quite localized. The reverse face of the illustrated 1982 cent shows only scattered, light die scratches. The design shows no loss of detail or strength except in the area containing the letters ERIC, which grow thinner and pinch out as they approach the design rim. Why special attention should have been paid to this area is unclear. Perhaps some peripheral die damage needed to be repaired. Interestingly, no die scratches appear in this area, suggesting that a very fine abrasive was used.

Design elements can also be lost to accidental die abrasion. Machine parts like a feeder can rake across the die face and wear away its surface. The resulting drag marks are typically both coarse and unidirectional. They are usually referred to as scrapes rather than scratches.

The illustrated 1996-P Washington quarter dollar shows heavy die scrapes that appear most prominently in front of Washington’s face but which continue for a short distance behind his head. The low-lying area between Washington’s eye and the root of his nose has been abraded away.

Die damage that combines aspects of both die dents and accidental die abrasion can be found on Lincoln cents from the period 1917 to 1945. The best-known example occurs on a 1924-D cent.

Appearing on the upper half of the reverse face, the zone(s) of damage often approximate the shape of an inverted right triangle, with the base of each triangle overlapping the motto E PLURIBUS UNUM and with the apex extending as far south as the word ONE. The damage is often bilateral, but it’s also common to have a single zone located either to the left or the right of the midline.

Shown here is the reverse of an uncirculated 1944 Lincoln cent with a triangular patch of damage whose base overlaps the letters LURI, which are strongly attenuated. Located to the left of the midline, this patch shows a smooth texture.

In other dies, vertically oriented die scrapes are seen. In many cases, like the 1924-D cent, the damage is best considered a die dent (or pair of die dents). In other examples, the damage seems entirely due to abrasion. And in still other cases, the damage looks to have been caused by both an impact and a scraping motion.

The consistent size, shape, and positioning of the damage, its frequent bilateral expression, and the presence of facing parallel edges, suggests that a machine part, like a feeder, is responsible.