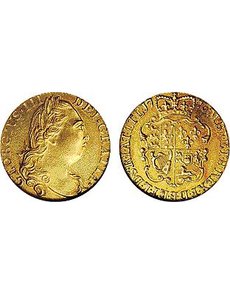 For decades, American kids sharpened their pencils and sat down to work out math problems involving reckoning the value of circulating foreign coins, like this 1776 English guinea, in U.S. dollars, dimes, cents and mills.

Even years after I last had to worry myself with such things, this time of year always finds my mind returning to one of those stressful, annual rites of passage for any young adult.

While I admittedly enjoyed school, I loathed finals, one big mind-dump to prove I wasn’t daydreaming for the entire semester.

Considering the dire consequences of a poor grade did little to make the drudgery of studying more attractive.

It was math that I dreaded most of all, since the only way to really prepare was to crack a dusty textbook and start working out review problems. More than once, figuring out what time a train left Philadelphia bound for Chicago took a back burner to reading an auction catalog or a newly arrived issue of Coin World.

Had I grown up 150 years earlier, perhaps doing math problems would have been a bit more fun.

Take this example in grains, guineas and pennyweights (dwts) from an 1819 textbook called The Scholar’s Guide to Arithmetic:

1. What is an English guinea worth which weighs 5 dwts, 6 grains?

2. What is the value of a French guinea, weighing 5 dwts, 6 grains?

A chart referencing a 1793 congressional act on the weights and standards of foreign coins then in circulation was included to work out your answers.

The textbook suggested “after you have weighed the piece of money, cast your eye into the following tables once or twice, and you will get its value without many figures.”

If only calculus had been so everyday practical.

Such questions turn up commonly in math textbooks from the 18th and 19th centuries.

You can almost imagine a whiny 12-year-old in 1865, peering at a question about guineas and pennyweights, wiggling in his chair, his hand raised, waiting to ask: “Will this be on the final?”