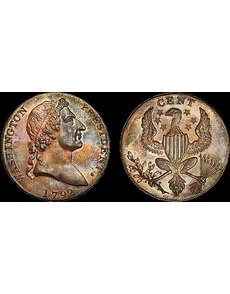 Though rare in actual numbers, 1792 Roman Head cents turn up at auction frequently. Their market velocity — the frequency with which they are sold publicly — is much greater than some coins that are much more “common.”

A common question: How rare is it?

In a world where a relic was valued simply for its historical importance, rarity would be a secondary or tertiary consideration. Alas, since a goodly number of people endeavor to actually own a finite number of things, rarity becomes primary. As long as supply and demand are the sole determinants of an object’s price, rarity will remain a question on the tip of the tongue of every collector.

Rarity can be assessed in lots of ways. A lot of the stars of Colonial numismatics are sufficiently rare to actually compose a census of all the known examples. We know how many Brasher doubloons there are, plus or minus one or two. The same goes for the number of examples of plenty of rare die varieties, famous early American medal rarities, and more.

For things that are more common, with dozens or even hundreds of known pieces, rarity figures tend to be rounded guesses. In these cases, rarity ratings tend to be based more on tradition than anything that can be claimed as scientific.

Of course, it is easier to be accurate with Colonial coins, a field where a “common” piece might number 200 known pieces, than in some other numismatic field from the era of massive mintages.

When collectors come to me for advice on how rare something is, I tend to offer a rarity metric that has little to do with either received wisdom or census numbers. The metric I prefer is one I call “market velocity,” or, how often a piece becomes available for purchase.

At one end of the market velocity scale are pieces that can always be purchased, at any coin show, or any decent auction, or from a dealer’s inventory within a phone call or two. At the other end of the market velocity scale are items that seemingly never turn up, perhaps are seen at auction once every five years, or 10 years, or once in a generation.

While some scholars pursue the academic question of figuring how just how many of a certain coin exist, most collectors really don’t want to know the answer to that question — they want to know how hard it’s going to be to find a piece for their collection! Among early American coins, plenty of relatively “common” pieces rarely turn up for sale, perhaps because Colonial enthusiasts tend to collect for decades, not to mention the many longstanding institutional collections that keep pieces off the market.

Of course, some “rare” coins seem to be offered in every major auction. For these reasons and others, market velocity seems a more relevant measurement for most collectors of Colonial coins than the number of pieces extant.