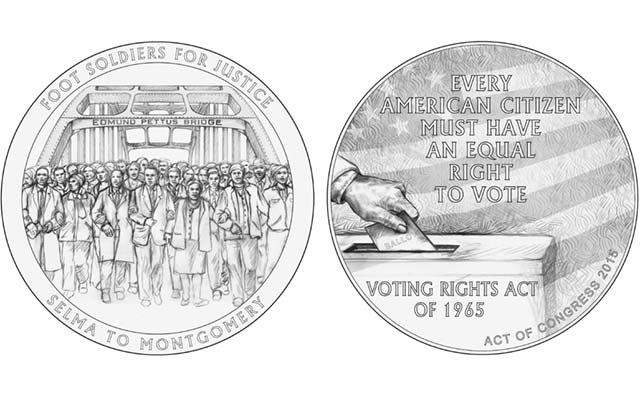 For Foot Soldiers Selma March congressional gold medal, the CCAC recommended an obverse design depicting marchers crossing the Edmund Pettus Bridge in Selma, Ala. The reverse depicts a voter placing their vote in the ballot box, noting the Voting Rights Act of 1965.

Recommending obverse and reverse designs for a congressional gold medal honoring the Foot Soldiers of the 1965 Selma to Montgomery Voting Rights March was the task of the Citizens Coinage Advisory Committee  June 16.

The CCAC recommended an obverse design depicting marchers crossing the Edmund Pettus Bridge in Selma, Ala. The reverse depicts a voter placing their vote in the ballot box, noting the Voting Rights Act of 1965.

Here is a comprehensive collection of the designs reviewed by the CCAC on June 16: