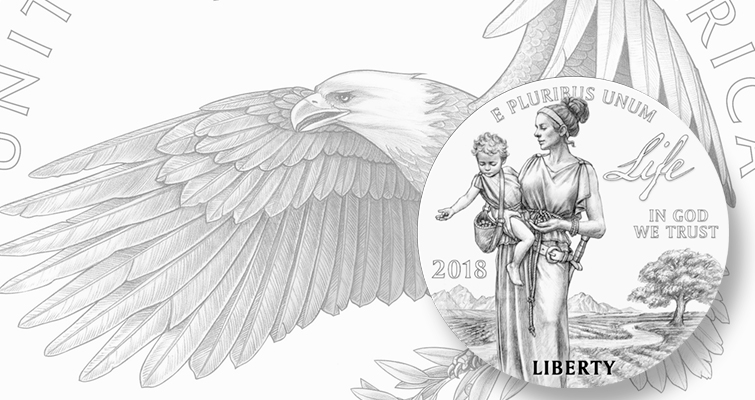 For the "Life" themed 2018 Proof American Eagle platinum coin, the CCAC recommends an obverse design depicting Liberty teaching a small child to sow seeds in a field. Her sword symbolizes the power to defend life. The eagle design shown in the background is recommended as the common reverse for 2018, 2019 and 2020. 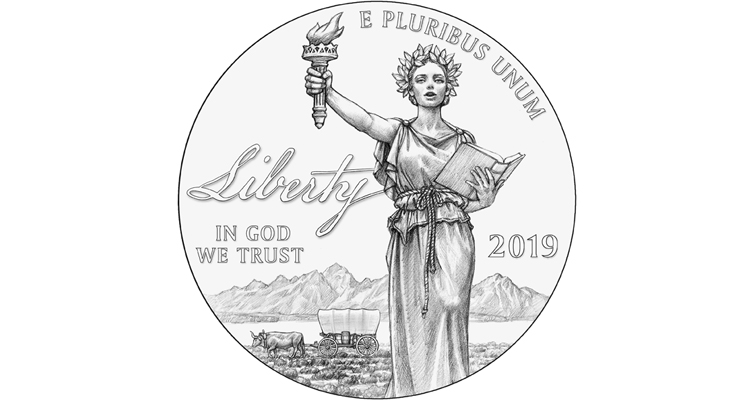 The CCAC recommended this 2019 obverse, with a "Liberty" theme portraying Lady Liberty keeping watch over prairies, lakes and mountains as pioneers travel westward. 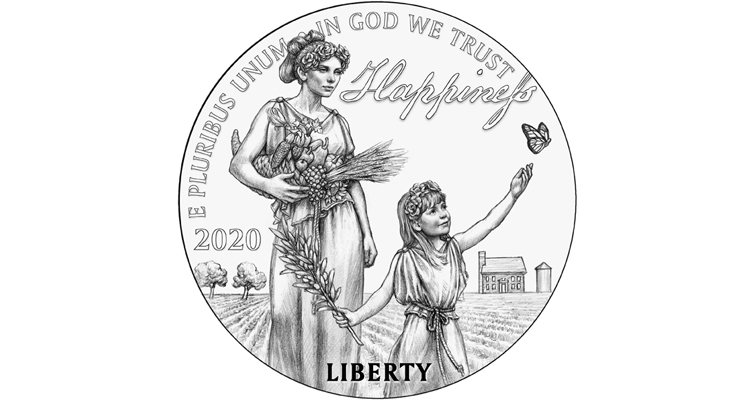 Under the "Pursuit of happiness" theme, the CCAC recommends a 2020 obverse for the Proof platinum coin depicting Lady Liberty harvesting bounteous fruits of her labor with a young girl at play nearby. 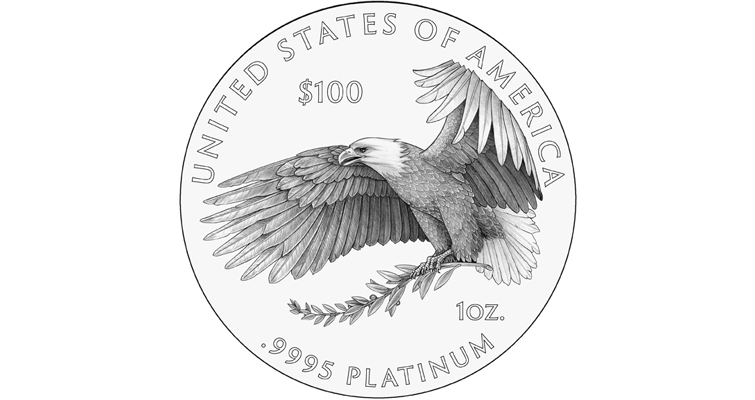 This eagle design is recommended by both review panels for use as the common reverse for the three-year Proof American Eagle platinum coin program. 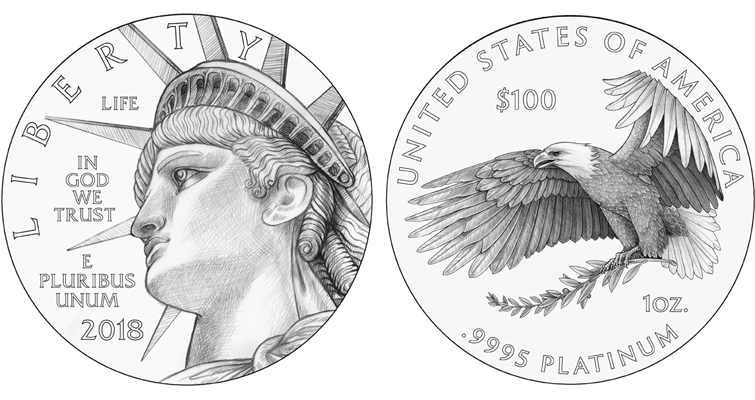 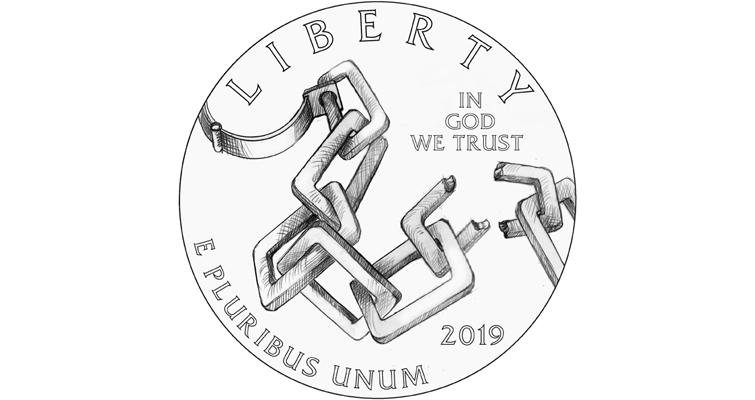 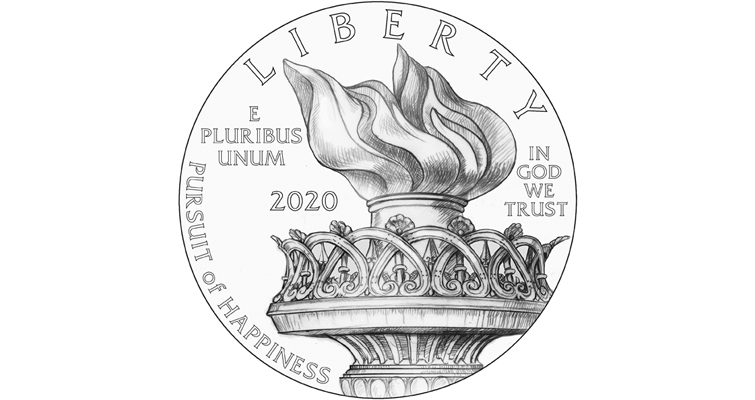 The nation’s two coin review panels have taken sharply different stands on how some the nation’s most expensive coins should be designed.

Meeting in Washington on two consecutive days, the Commission of Fine Arts and the Citizens Coinage Advisory Committee reviewed 12 sets of proposed obverse designs for platinum coins planned for 2018 to 2020.

Those coins should sell for about $1,700 each, making them the most expensive single coins in the U.S. Mint’s sales inventory.

That factor seemed to play heavily in the CCAC’s deliberations, as the panel was warned that these were coins with “a pedigree” and buyers would be extremely sensitive to the designs.

“What we’re asking for is a really classy design,” said CCAC Chair Mary Lannin at that group’s Sept. 16 meeting.

The three coins are supposed to celebrate “Life,” “Liberty” and “The Pursuit of Happiness,” themes taken from the Declaration of Independence.

Three CFA members gave their “primary” endorsement to a three-design set that features elements from the Statue of Liberty — a portrait of the statue’s face, the broken chains that lie at Liberty’s feet, and Liberty’s torch.

Their second recommendation was for a three-design set that shows a fluttering American flag when all three coins are placed in a triangle.

The CFA also endorsed an image of an eagle about to fly for the series reverse.

In the CCAC meeting, held a day after the CFA vote endorsed the three different sets of obverses, Erik Jansen, a collector from the Seattle area, urged his fellow members on the CCAC that a stronger, more direct recommendation was needed because “the secretary is going to be confused here.”

Despite a wide range of views about the designs, the committee overwhelmingly rallied behind the Lady Liberty set, giving it almost unanimous support.

The Lady Liberty designs drew 21 out of a possible 24 votes under a voting scheme that allowed each of the eight CCAC members present to cast up to three points for any coin design.

The CCAC also gave a unan­imous 24-point vote to the same reverse design showing an eagle taking flight that the CFA endorsed.

Both the CCAC and CFA seemed to be delighted with the proposed designs.

Since the CFA debated the coins with less that a quorum, the recommendation of its three members must be formally ratified by a quorum at its Oct. 18 meeting, according to CFA Secretary Thomas Luebke.

But letters citing the CFA recom­mendations will be issued soon, he said.

What made the CCAC deliber­ations interesting was how the committee voted to urge certain changes to their recommended designs.

For example, some members did not like the word “Liberty” that had been incused on the lower portion of the coin.

So, at the urging of Robert Hoge, a coin museum curator by profession, the committee voted to place the word on a cap on Lady Liberty’s head, much in the manner of classic American coins.

This would meet a congressional mandate that the three coins must bear the word “Liberty,” said the Mint’s lawyer, Greg Weinman.

Other changes voted by the CCAC would call for simplifying the background designs on the three obverse designs.

Heidi Wastweet, a Seattle sculptor, noted that the CCAC has long argued for simplified designs.

This set “has too much detail for the size of the pallet.”

The Mint rarely has grouped designs by individual artists for presentation to the review panels.

Without identifying the artists, the Mint said it had asked them to provide illustrations for all three years of the platinum series. Most also submitted an eagle design for the reverses.

The CCAC members applauded this action and the fact that they were given descriptions by the artists of what they were trying to accomplish with their designs.

The idea of changing the obverse design annually for three years is a departure from the past approach for the Proof American Eagle platinum coins.

Since 1998, a different reverse design has been used on the Proof coin annually, the designs representing a series of multiyear themes (for example, the first theme spans the issues of 1998 to 2002, with reverse designs showing a bald eagle soaring each year above a different geographic region of the United States).

In contrast, Proof and bullion American Eagle platinum coins have carried John Mercanti’s Statue of Liberty portrait on the obverse since the coins debuted in 1997. Mercanti’s Heraldic Eagle reverse design has been used on bullion issues and on the first Proof issue.

The three coins will share a new common reverse under the Mint’s plan.

Two changes in the CCAC membership were announced at the meeting.

Sculptor Stevens-Sollman recently was given a second four-year term on the committee and Steve Roach, editor-at-large of Coin World, has resigned from the panel.

U.S. Mint lawyer Greg Weinman said Roach, who had been named to the panel earlier this year, resigned after accepting a position in the Treasury Department. His employment would prohibit him from remaining on the panel, Weinman said.

The Mint is seeking a replacement for Roach, the lawyer said. 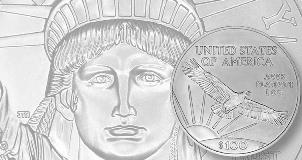 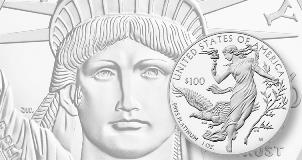 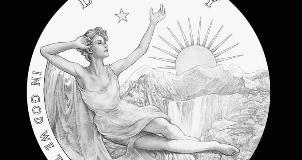