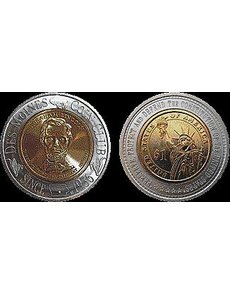 The Des Moines (Iowa) Coin Club, founded in 1936, is celebrating its 75th anniversary in 2011 with five different encased coins, including 2010 Lincoln Presidential dollars, 2011 Lincoln cents and a limited quantity of 1936 Lincoln cents.

What is intended for the reverse of the Lincoln dollar encasement reads PRESERVE, PROTECT AND DEFEND THE CONSTITUTION OF THE UNITED STATES, taken from the presidential oath of office, plus ?????.

The intended reverse of the Lincoln cent encasement features a Lincoln quote, WHATEVER YOU ARE, BE A GOOD ONE, with Abraham Lincoln’s signature at the bottom.

Penny Press Mint affixed the encasements to the coins.