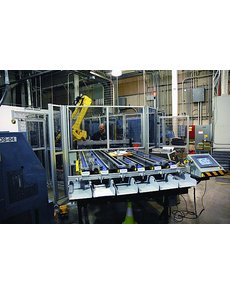 In the background, a yellow robotic arm can be seen that is central to a capital project at the Denver Mint to improve the early stages of die production. 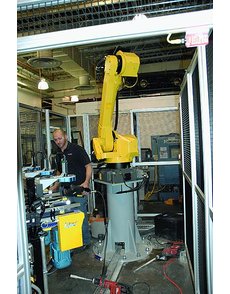 The robotic arm towers over a worker involved with installing the new equipment. 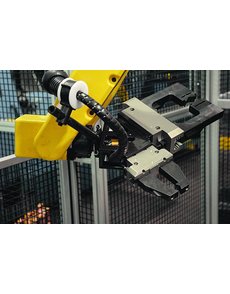 The fingers on the robotic arm will grip the hub or die after it has been initially hubbed, then maneuver it from station to station to further refine the die. 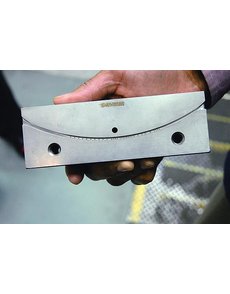 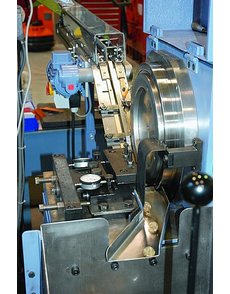 Struck coins are centrifugally propelled along the feeding mechanism at top and gripped at the bottom between the edge segment, positioned within a bolted cover at center, and the large impeller wheel at right. 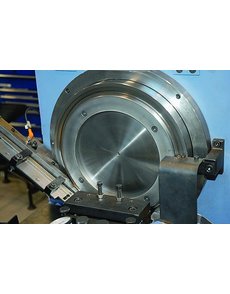 The feeding mechanism, left, carries the struck dollars down to the edge segment (housed in a box and held in place with vertical bolts) and impeller wheel, which spins counterclockwise. 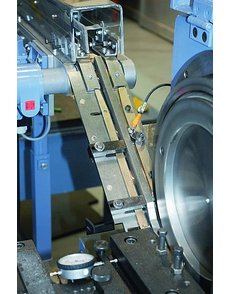 Photo shows the feed mechanism for the edge-lettering equipment. 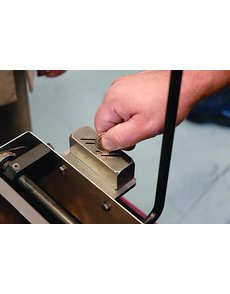 The edge-lettered dollars are checked to ensure they’ve maintained the proper thickness after completing the edge-lettering cycle.

The Denver Mint is in the middle of automating components of its die manufacturing operations to improve overall die quality, extend die life and cut die production costs.

The facility has already automated most of the production of its circulating coin denominations, and has plans to turn a production line previously dedicated to dollar production to cent production.

Randy Johnson, division chief for die manufacturing at the Denver Mint, told Coin World during a May 9 floor tour of the facility that installation of a robotically controlled lathe operation for use in die production will trim the time for one stage of the process by 75 percent.

Currently, under the older system, a three-lathe cell operation takes 2.86 days to complete three grinding and polishing operations in the initial phases of die production. Converting to a robotic operation will drop the time to 0.61 day.

The switch will also reduce the number of Mint employees needed to complete the three tasks to just one person, who would use a computer-controlled program to operate the centrally positioned robotic arm to rotate a working hub — a right-reading, positive matrix — between three pieces of machinery. One of those pieces of machinery has already been installed, with the other two soon to follow.

Employees currently involved in die production who will no longer be needed there after the robotics operation is in place will be reassigned within the Denver Mint, according to Barbara E. Hurtgam, Denver Mint deputy plant manager.

Production of hubs and dies begins with selection of a rod of die steel having the proper diameter for the denomination (hubs bear right-facing, positive designs, with dies bearing mirror image, incused designs; the production techniques described are identical whether a die or a hub is being prepared). A length of the rod is cut slightly longer than needed to serve as the die body. The shortened piece of die steel is placed into a hydraulic press and, under pressure, one end is formed into a mirror-finish cone (the cone shape facilitates metal flow when the die is hubbed, the step where it is given its design). From there, the die steel with its conical face is moved to a hubbing press, where the conical face is impressed with the coin design by a hub or a die (hubs are impressed into the conical die steel to create dies, while dies are used to create hubs).

For the next stage of the process, currently, the partially completed die is manually moved to each of three separate stations to (1) grind the body of the working hub to the proper dimensions to fit within a coining press, (2) remove extra burrs or protruding metal, and (3) clean up the tool produced. This three-part stage of the process will be affected by the installation of the robotic system; the partially completed hub or die will be transferred from one station to the next robotically, while currently an individual human operates each station.

After these three steps are completed, the die steel undergoes (and will continue to undergo) separate additional steps for light sandblasting and heat treatment.

Johnson said the efficiencies in the time saved by the robotic system will allow dies to be made to order when needed, rather than made for inventory, and will also save money. The savings will include a nearly 50 percent reduction in die scrap, Johnson said.

Johnson said the Denver Mint has also been experimenting with die steels to help improve die life. A 52/100 die steel, standard for the industry, had historically been used on obverse and reverse dies for circulating coins from cent through half dollar, Johnson said. The Denver Mint now uses an A-9 die steel for circulating and Uncirculated Mint set coin dies, resulting in a 40 percent improvement in die life, he said.

Johnson said die failure is often the result of metal fatigue, resulting in cracks and chips.

? For quarter dollars, an average of 300,000 coins per obverse and reverse die. Die life varies for each America the Beautiful quarter dollar design.

? For Kennedy half dollars, approximately 700,000 coins per die

Johnson said some production problems have been experienced with the production of Lincoln, Union Shield cents. Any problems encountered with metal flow or striking problems with a design are reported to the engraving staff at the Philadelphia Mint so those problems can be rectified for the next year’s production, he said.

Gary Hall, chief of the Denver Mint’s quality assurance division, said the Denver Mint is currently having production problems for several coins that will be produced only in 2012, including the 2012 Acadia National Park quarter dollar for Maine. Average die life for that coin is at only 100,000 pieces per die.

The facility also encounters striking problems with Presidential dollars where the portrait depicts the chief executive with a full head of hair and a full beard, Hall said.

The Denver Mint has also incorporated improvements to its edge lettering operations for Presidential and Native American dollars.

Instead of just one arced groove in the edge segment containing the edge lettering (E PLURIBUS UNUM, the date, Mint mark and 13 stars), the segments now have two arced grooves, only one of which is placed into operation at any one time.

If any of the raised lettering in the edge segment groove wears or is otherwise damaged, that area is Xed out to identify the problem area, and the edge segment is flipped over so the second arced groove can be used.

Struck coins are transported to the edge-lettering equipment through a conveyor system integrated with the coinage presses.

The conveyor drops the struck coins into a centrifugal bowl, which then feeds the coins into the edge-lettering equipment at the rate of a 1,000 coins or more per minute. The coins are rotating counterclockwise as they are fed into the edge-lettering equipment, which contains a vertical impeller wheel, also rotating counterclockwise, on one side and the edge segment with the edge lettering on the other. The impeller wheel grips the plain edge of each struck coin and propels it along the grooved segment to form the inscription, then out the end of the edge segment into a steel trough.

The edge segment is positioned so that enough space exists between the segment and impeller wheel to allow for the proper imparting of the incuse edge lettering and any expansion of the dollar during the process. Periodic checks are made to ensure the dollar coins remain their proper thickness.

Hall said the edge-lettering application is checked every 10 to 15 minutes with inspection of coins to assure the edge lettering is imparted to the proper depth (is not too deep or too shallow) and is not missing letters. If movement occurs in the edge segment and the spacing becomes too loose or too tight, a die setter will readjust the edge segment for proper alignment, Hall said.

Should any dollar coins being fed into the edge-lettering equipment jam, the jam can be cleared by reversing the spin direction of the centrifugal bowl on the equipment before trying to run any more coins through the system.

Hall said edge segments are capable of placing the edge lettering on more than 1 million coins before being retired. ¦