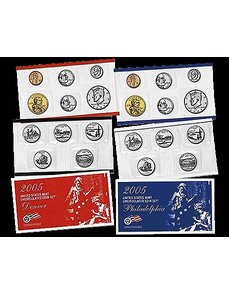 The 2005 Uncirculated Mint set contains Satin Finish coins, a change made to improve their appearance and boost sales.

Once a staple of the coin-buying public, annual Uncirculated Mint sets seem to be falling out of fashion.

To counteract slipping sales, the Mint announced that, in 2005, for the first time ever, coins included in annual Uncirculated sets would have a Satin Finish. According to the Mint’s press release, “The United States Mint has chosen the new satin finish because it is handsome and provides consistency for United States Mint uncirculated products, including the ... Commemorative Coins and American Eagle Silver Bullion (uncirculated) coins.”

From this statement, it seems clear that the Mint blamed lagging sales at least in part on the visual appearance of the coins.

But new challenges emerged. The finish was highly variable and equipment that placed coins into packaging regularly scuffed the coins. The Mint improved the overall appearance of the finish in 2006, but the sets didn’t go on sale until July 18. Perhaps owing to this shortened sale cycle, only 847,361 sets sold.

In 2007, Presidential dollar coins were included in the Satin Finish Mint set. The addition of eight dollars — four each from the Philadelphia and Denver Mints — pushed the price to $22.95 from $16.95.

To address packaging machine damage, the Mint also changed the packaging material from traditional pliofilm used since the 1950s to a more rigid blister pack.

The set was clearly a better value with the eight more $1 coins. The Mint was working to address quality concerns related to packaging equipment, but the set wasn’t released until very late in the year, Oct. 9. Sales barely rebounded, with 895,628 sold. In 2008, sales declined 17 percent to 745,464 sets, a level not seen since 1963.

Currently, the 2008 Mint set has the second highest value of any recently issued set in the secondary market, sometimes trading for as much as $100. As seen time and time again, something unpopular at its time of issue can emerge as a key issue later because of its relative scarcity. Next month, this look at Mint sets continues, focusing on 2009 to date.