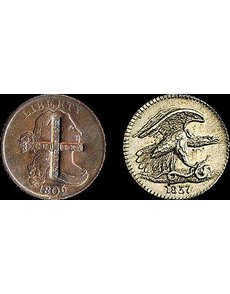 Counterstamped U.S. half cents and 1837 Feuchtwanger cents are highly desired numismatic items for which in 2013 no grading standards or published price guides exist.

It was 60 years ago in 1953 that I started dealing in coins in a small way part-time. Things have changed somewhat since then!

In 2013, there is a long list of nice things about our hobby, industry, or whatever you want to call it.

Because of coins, tokens, medals and paper money I, at age 74, can say I have never worked a day in my life.

Well, that’s not quite true, but I have enjoyed every bit of professional numismatics and, God willing, I’ll be active for years to come. After all, my fine long-term (since about 1955) friend Eric P. Newman is still doing numismatic research at age 101.

But how different today is from 60 years ago. Back in 1953 no agreed-upon grading system existed. Coins that I thought were polished were offered as Proof, lightly worn coins were often advertised as “Brilliant Uncirculated,” and John J. Ford Jr. wryly observed a few years later that more than 50 percent of the “1916-D” dimes he saw at a recent convention were fakes.

A Guide Book of U.S. Coins was most everyone’s one-volume library and authority for prices. No daily, weekly or even monthly prices anywhere. The Professional Numismatists Guild did not exist; no place to turn if you bought a counterfeit and no certified coins.

There were no ZIP codes or area codes, and to call long distance I had to go through a series of operators. Technologies we now take for granted were in their infancy or not widely available to the public. Could you exist in numismatics today if such were still the case?

And yet numismatics was a great hobby (the word “industry” hadn’t been applied here yet) in the 1950s, camaraderie was everywhere, and almost everyone had a good time. My customers by mail would send me long “want lists,” and coin by coin I would build sets or entire collections for them. I had many exclusive clients.

You can be a “numismatist” or even a “professional numismatist” today without knowing much about grading, authenticity, pricing or other things. No talent needed, no expertise, no studying.

For others who like the thrill of the chase, the excitement of discovery, numismatic byways have risen to importance — Betts medals, obsolete bank notes, Civil War tokens and other series where price guides are infrequent or even nonexistent, grading is anything but standard, and it is still 1953 in a way.

At the same time, 2013 is exciting, with all of the technology and advancements. While looking toward the future, I still like to reflect upon the glories of the past.