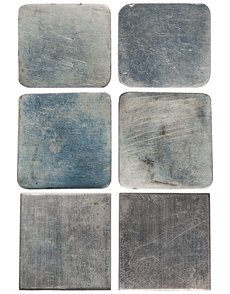 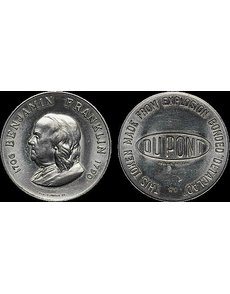 Detaclad token made as a presentation piece for DuPont is being offered at auction. 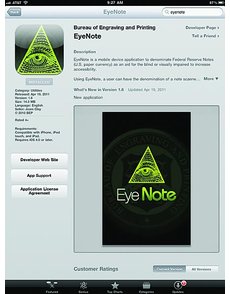 The consignor of items documenting Revere Copper & Brass Inc.’s 1964 experiments that led to copper-nickel clad U.S. coinage is hopeful that the records her father kept will go to someone who will appreciate the history of that testing.

That historical material,
including an experimental token and three square planchets, all made of the then-new copper-nickel clad composition, is heading to auction.

The Michigan woman, who has requested anonymity, is the daughter of Richard M. Brown, who was the methods and metallurgical manager at Revere Copper and Brass Inc. in Detroit in 1964. That firm was “responsible for the hot rolling process of the U.S. Mint’s coinage metal, which was using DuPont’s explosive bonding process,” the woman told Coin World May 30.

The experimental token was struck in 1964 on planchets punched from strip produced through a method of explosion welding patented as Detaclad by manufacturer DuPont, which partnered with Revere. The copper-nickel clad composition was produced as a substitute for the silver alloy used for U.S. coinage.

The token and planchets are only part of the consignment. They are accompanied by documentation detailing the joint Revere-DuPont experiments: an apparently unique photographic album compiled by Brown illustrating the rolling process, along with a copy of an article about the testing.

Richard Brown produced the bound volume titled “A Pictorial Summary of the Conversion of Cupro-Nickel Coinage Metal for U.S. Mint” — which is part of the consignment — containing 21 color photographs documenting the Detaclad process.

According to the consignor, the photographs and documentation are the last remaining record of Revere’s experimentation, adding to their historical significance.

All of the materials are offered as a single lot in Heritage Auctions’ June 5 to 9 sale held in conjunction with the Long Beach Coin, Stamp & Sports Collectible Expo in Long Beach, Calif.

The Detaclad token in the auction features a portrait of Benjamin Franklin on the obverse facing left with his name above, the date 1706 on the left and 1790 on the right. In very small print at the bottom near the rim is AUG C. FRANK CO. (August C. Frank Co., the Philadelphia firm that actually struck the pieces).

The reverse of the token has the DuPont logo encircled in the center and THIS TOKEN MADE FROM EXPLOSION BONDED “DETACLAD” TM circling close to the rim.

The token in the auction is the diameter of a quarter dollar and has a plain edge.

Heritage grades the token, which is not in a third-party grading service holder, as Mint State 62.

According to Kenn Henderson, who wrote about the Detaclad experiments in the Sept. 6, 1993, issue of Coin World, Detaclad “is a patented process for laminating 75/25 copper-nickel to the copper core.”

Henderson notes, “A special set of dies were made to produce 500 pieces for presentation” featuring the Franklin portrait. The DuPont token in the sale would be from that mintage of 500 pieces.

According to Jim Stoutjesdyk of Heritage: “I met a lady ... at the Michigan State Numismatic Society coin show in April. She came up to my bourse table and began telling me about her father, Richard M. Brown. ... She explained that Revere had the government contract to roll the coinage metal for the new clad coinage that was being produced.

“Her father was involved with the testing and development of the new ‘sandwich coins’ (as she referred to them) from the earliest stages. This included helping to determine the electromagnetic properties needed to trip the mechanisms in the existing coins boxes in vending machines and pay telephones the same way that silver coins were already doing. She explained that her father photographed and described every step of the process used to create the new clad coinage metal and then [she] showed me the folder that he assembled. I was really amazed to see this pictorial history ... that provided a fascinating insight into this important transitional period of modern U.S. coinage history.”

The consignor told Coin World that her father spent time at the Denver Mint in 1964 in working with Mint officials and others to ensure that the electromagnetic properties of the new composition were compatible with existing coin-operated equipment, especially telephones. Operators of coin-operated equipment were insistent that any new coinage be usable in existing machines without the need for costly upgrades.

She also noted that he spent time “behind bunkers” at the government testing grounds at Los Alamos, N.M., where the explosive welding process was tested. Los Alamos was also the site where the first atomic bombs were developed.

She also recounts that she took the square planchets to school for show-and-tell in 1964, relating to her classmates that their coins would soon look like the planchets.

The EXPLOSION BONDED inscription on the reverse of the token refers to the method used in producing coinage strip composed of two outer layers of copper-nickel and an inner core of pure copper.

According to the Wikipedia article on the topic, chemical explosives were used in welding the separate layers of metal to each other. “The process does not melt either metal, instead it plasticizes the surfaces of both metals, causing them to come into intimate contact sufficient to create a weld,” according to the Wikipedia article. “Large areas can be bonded extremely quickly and the weld itself is very clean, due to the fact that the surface material of both metals is violently expelled during the reaction.”