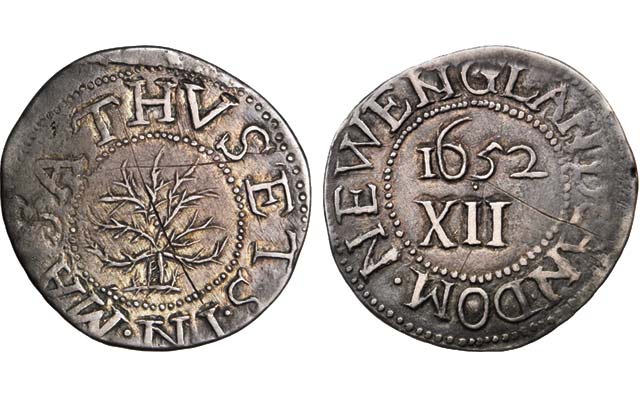 Serving as small change in Colonial times, this 1652 Oak Tree shilling was cut in half to serve as a sixpence piece. Graded EF-40 by the auctioneer, it sold for $3,965.63 at Stack’s Bowers’ March 26 Kendall Foundation auction.

A highlight of The Henry P. Kendall Foundation Collection, which brought more than $9.5 million when offered at Stack’s Bowers Galleries’ March 26 auction in Baltimore, was his collection of early Massachusetts silver coins. As John Kraljevich Jr. wrote in the introduction, with many great collections like the Kendall Foundation’s coming to market recently, “Collectors have an opportunity in the present to acquire an array of Massachusetts silver coins that would have been unimaginable in most markets since the Civil War.” Here are three that caught my eye.

A highlight of the Kendall Collection is the depth of its holdings of Massachusetts silver coins. Included is this 1652 Oak Tree shilling, cut down to a sixpence. An absence of small change required the occasional mutilation of coins so their parts could be used as smaller denominations.

This example has the added historical provenance of coming from the shipwreck of the HMS Feversham. As the description noted, “Cut in half as small change before the Feversham left port in 1711, a historic relic from the earliest days of not only Massachusetts, but the Feversham’s last port of New York City, as well.” While the wreck contained numerous cut coins, few are as well-detailed as this example, which was graded by Stack’s Bowers as Extremely Fine 40 and sold for $3,965.63. Stack’s had offered the piece previously in January 1999 as part of its sale of contents from the wreck of the HMS Feversham.

1652 Oak Tree shilling that sold for $35,250 stands out among Kendall Foundation Collection rarities