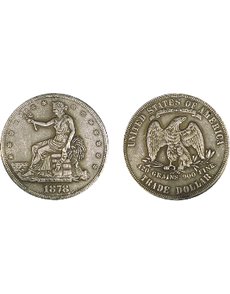 What appears to be a genuine 1878 Trade dollar is actually one of 361 counterfeits shipped by mail from China and seized April 20 in Chicago by Customs and Border Protection agents at O’Hare International Airport.

The counterfeit Trade dollars seized by Customs and Border Protection agents were tightly packaged in paper rolls and secured in a box for shipping from China to an Illinois destination. 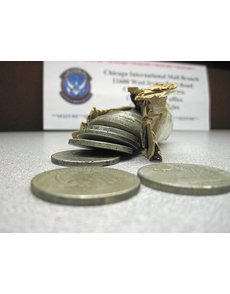 CBP authorities assigned to international mail facilities in major cities around the United States have been alerted to the seizure of the Chinese counterfeits and to be on the lookout for similar packages.

A full-scale investigation into counterfeit rare U.S. coins produced in  China is being launched in Chicago by U.S. Customs and Border Protection agents after a package containing bogus U.S. Trade dollars was seized April 20 at the International Mail Branch at O’Hare International Airport.

The 361 counterfeit coins seized were bound for a recipient at an Illinois address, who was expecting to sell the fakes online over the eBay auction site, according to Customs and Border Protection officer Brian J. Bell, who serves as the public affairs liaison in Chicago and who spoke with Coin World April 22.

As a result of the seizure, Bell said CBP agents stationed at international mail facilities in major U.S. cities have been notified of the seizure and to be on the lookout for similar packages.

“We’ve notified other facilities,” Bell said. “You may start seeing more seizures coming from China [to] prevent them from entering the market. We’re going to do our best to stay on top of this.”

CBP is constantly screening arriving international mail and is on the lookout for any type of contraband, counterfeit or prohibited items being shipped to the United States that can harm the community or take advantage of the unsuspecting buyer, according to the agency.

CBP officers and agriculture specialists are stationed at International Mail Facilities located throughout the country.

“Legitimate traders are being duped into buying these coins believing they are genuine,” said David Murphy, CBP director of field operations in Chicago. “We strongly recommend buyers or any consumers to be aware and use caution when making these types of purchases on the Internet.”

Bell said the investigation being initiated by U.S. Immigration and Customs Enforcement will look into whether the intended recipient of the intercepted package has knowingly purchased and sold similar counterfeits before on eBay or through any other venue. Bell said investigators will also be working with eBay officials to examine the eBay activity of the package’s intended recipient.

Bell said the package and its contents will remain with CBP as part of the investigation and used by prosecutors to determine whether state or federal criminal charges may be forthcoming. Bell said U.S. Attorney Patrick Fitzgerald in Chicago had not yet been notified of the seizure and commencement of an investigation.

CBP officers became suspicious when they noticed anomalies while conducting x-rays of the heavy package bound to an Illinois address from China. Bell said the intended recipient’s address was in English, while the shipper’s address was in Chinese. He said investigators will be seeking translation of the Chinese address to determine the name and location of the shipper.

The 361 counterfeit coins seized are dated 1873 through 1878, the years the Philadelphia, San Francisco and Carson City Mints struck Trade dollars intended for circulation.

Bell said a sample counterfeit coin was sent for analysis to CBP Laboratory and Scientific Services in Chicago where it was determined to be silver-plated brass, not .900 fine silver, although the weight was close to the weight of a genuine coin. The package was seized based on the laboratory results, Bell said.

U.S. Customs and Border Protection is the unified border agency within the Department of Homeland Security charged with the management, control and protection of U.S. borders at and between official ports of entry. CBP is charged with keeping terrorists and terrorist weapons out of the country while enforcing hundreds of U.S. laws. ¦