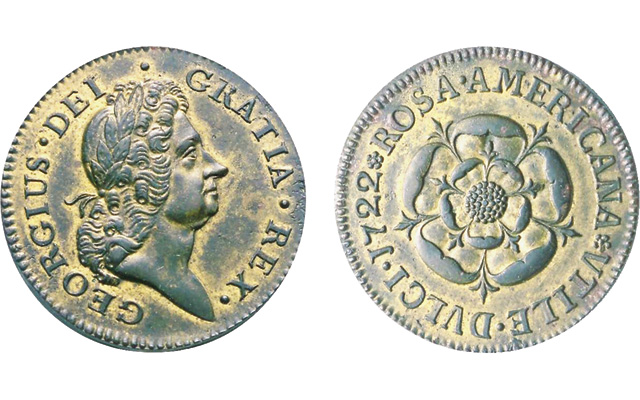 The 1722 Rosa Americana penny was struck in England to the specifications of William Wood and shipped to America. 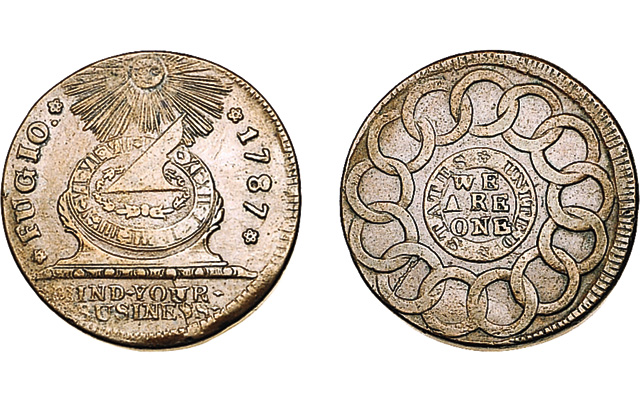 This 1787 Fugio copper was struck to the order of the United States under private contract by James Jarvis. 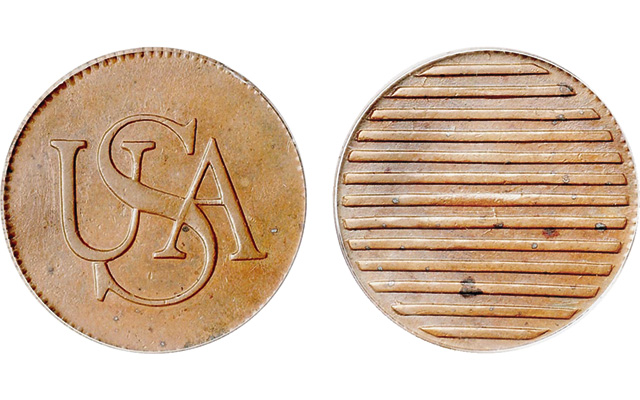 No one today knows why the Bar copper, first seen in circulation in New York City in 1785, was issued. 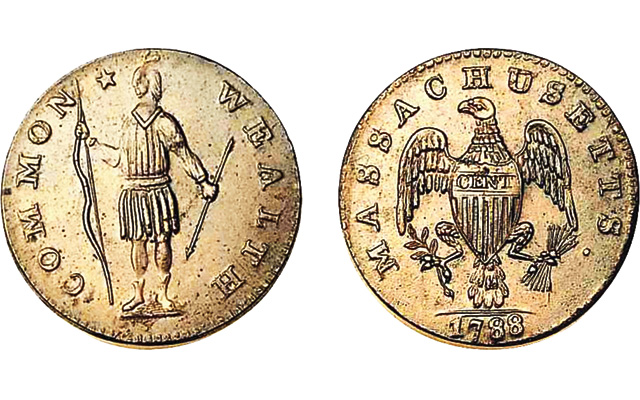 1788 Massachusetts cent was struck at a mint operated by Joshua Witherle to the order of the state of Massachusetts.

On the front page was an article, “Old American Coins,” which forms the subject for this week’s column. I have added modern pictures.

In that long-ago time, coin collecting was followed by perhaps a couple dozen people, most of whom specialized in medals, ancient coins, and foreign issues. There were no reference books in print in America to tell what coins had been issued in this country, by whom, or whether they were rare or common. Coins were interesting to the public, and occasional mentions of them appeared in the popular press. The following is excerpted from the Spectator article, with my comments in brackets following each:

“Old American Coins: A gentleman has favored us with the inspection of a small collection of American copper coins issued before the establishment of the present government, by some of the colonies and states. The following is a description of them.

“No. 1. This coin is larger than a half cent. On one side it has thirteen ribs or bars which run parallel to and are equidistant from each other On the other side are the letters U.S.A., the S being of larger size, running across the other two letters. It has no date or any other inscription.” [This is the Bar copper first seen in circulation in New York City in the summer of 1785. To this day no one knows who issued them or why.]

“No. 2. On one side a head surrounded by ‘Georgius Dei Gratia. Rex.’ On the other side is a rose and the following inscription, ‘Rosa Americana. Utile Dulci. 1722.’ “ [This is a Rosa Americana penny struck to the order of William Wood in England. These were shipped to America as a speculative venture.]

“No. 3. On one side a chain of thirteen circular links running around the face of the coin. In the centre a circle having upon it the words ‘We are one’ and around these words, ‘United States.’ On the other side there is a sun at meridian height, looking down upon a dial, beneath which appear these words, ‘Mind your business.’ The word ‘Fugio’ and the date 1787 also appear on the same side of the coin.’ “ [This is a 1787 Fugio copper struck to the order of the United States under private contract by James Jarvis.]

“No. 4. On one side the American eagle having on its breast a shield with the word ‘cent’ upon it. Around the face of the coin is ‘Massachusetts 1788.’ On the other side is an Indian at full length with his bow and arrow and the word ‘Commonwealth.’ ” [This is a copper cent struck at a mint operated by Joshua Witherle to the order of the state of Massachusetts. Cents and half cents were made with the dates 1787 and 1788. The state found that the coins cost twice face value to produce and closed the facility.]

The above coins are readily collectible today. More information can be found in A Guide Book of United States Coins. Today in 2015 such coins are hot tickets in the marketplace.

See you next week.