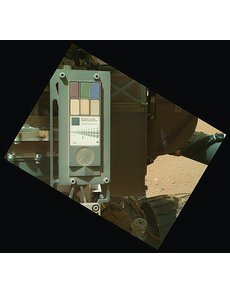 Part of Curiosity’s left-front and center wheels and a patch of Martian ground are visible in this image of the MAHLI calibration target on Curiosity. Both images are cropped as provided by NASA. 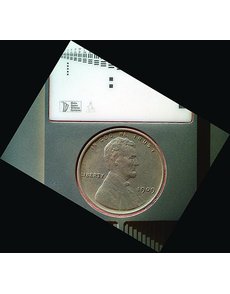 A thin layer of Martian dust covers the surface of a 1909 Lincoln, V.D.B. cent carried aboard NASA’s Curiosity rover on the surface of Mars as part of a calibration target for the vehicle’s MAHLI camera.

A camera on board NASA’s Curiosity rover has taken the first photographs from the surface of the planet Mars of a 1909 Lincoln, V.D.B. cent the vehicle carries.

The Lincoln cent is part of a calibration target for Curiosity’s Mars Hand Lens Imager. The first images of the target and the cent were taken on Sept. 9, during the 34th Martian day, or sol, of Curiosity’s work on Mars, according to NASA.

“Part of Curiosity’s left-front and center wheels and a patch of Martian ground are also visible” in one of the images, according to NASA.

The cent included as part of the calibration target “is a nod to geologists’ tradition of placing a coin or other object of known scale as a size reference in close-up photographs of rocks, and it gives the public a familiar object for perceiving size easily when it will be viewed by MAHLI on Mars,” according to a press release. The coin used for the target was purchased by Mars Hand Lens Imager (or MAHLI) principal investigator Kenneth Edgett, of Malin Space Science Systems, San Diego. Edgett told Coin World in February that he considers himself an “amateur” coin collector.

In February, Edgett explained the practice of geologists using something like a coin when taking photographs on Earth: “When a geologist takes pictures of rock outcrops she is studying, she wants an object of known scale in the photographs. If it is a whole cliff face, she’ll ask a person to stand in the shot. If it is a view from a meter or so away, she might use a rock hammer. If it is a close-up, as the MAHLI can take, she might pull something small out of her pocket. Like a penny.”

According to NASA, the camera that took the photographs is in the turret of tools at the end of Curiosity’s robotic arm. “Its calibration target is on the rover body near the base of the arm. The Sol 34 imaging by MAHLI was part of a week-long set of activities for characterizing the movement of the arm in Mars conditions. MAHLI has adjustable focus. The camera took two images with the same pointing: one with the calibration target in focus and one with the wheel and Martian ground in focus. The view here combines in-focus portions from these shots,” according to NASA.

In addition to the Lincoln cent, the calibration target for the MAHLI instrument includes color references, a metric bar graphic and a stair-step pattern for depth calibration.

“The new MAHLI images show that the calibration target has a coating of Martian dust on it. This is unsurprising — the target was facing directly toward the plume of dust stirred up by the sky crane’s descent engines during the final phase of the 6 August 2012 landing,” according to NASA.

Future images of the Lincoln cent will allow NASA scientists and coin collectors to monitor any changes to the cent, including toning, as it sits exposed to the elements. While coins have been carried aboard other NASA spacecraft as parts of instrument packages, this is the first time that a coin can be monitored while it rests on the surface of another planet.

“The main purpose of Curiosity’s MAHLI camera is to acquire close-up, high-resolution views of rocks and soil at the rover’s Gale Crater field site. The camera is capable of focusing on any target at distances of about 0.8 inch (2.1 centimeters) to infinity, providing versatility for other uses,” according to NASA. ¦